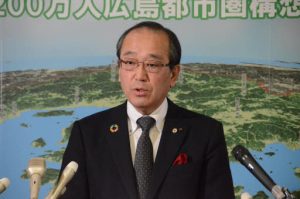 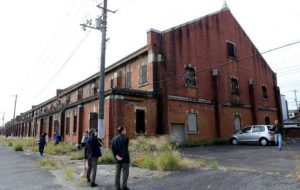 Hiroshima Prefecture owns the former Army Clothing Depot, the largest site with A-bombed buildings in the City of Hiroshima. In response to its draft of demolishing two buildings, and preserving the outer appearance of another, Hiroshima Mayor Kazumi Matsui requested on December 18, that all the buildings be preserved. This request was prompted by a sense of crisis over preserving the A-bombed buildings and by the activities of A-bomb survivors, who seek to maintain the preservation of the former Army Clothing Depot as a silent A-bomb victim.

The prefectural government is discussing preserving the outer appearance of building No.1 and demolishing buildings No. 2 and No. 3, considering embarking on the project in fiscal year 2020. Hiroshima Governor Hidehiko Yuzaki mentioned the idea of making a final decision, based on the opinions of people in Hiroshima Prefecture and the necessity of taking prompt steps to ensure the safety of these buildings. Hiroshima City has now requested the prefecture to deal with the issue more carefully.

Iwao Nakanishi, 89, a resident of the City of Kure, experienced the atomic bombing within the grounds of the Army Clothing Depot and helped care for the wounded that were carried in. He has repeatedly shared his A-bomb experience there. He said, “It is very encouraging that the city government has clearly expressed the preservation of all the buildings. Taking this opportunity, I hope the national and prefectural governments, and the city government, will work together and seriously think about how to revive the buildings.”

The former Army Clothing Depot, whose iron doors were warped by the A-bomb blast, illustrates the intensity of the atomic bombing. The Poet Sankichi Toge wrote of a disastrous scene at a first-aid station in his poem titled Soko no Kiroku (Records of the Warehouse). Masahiko Ikeda, 73, the secretary general of the Association of Preservation Data on Hiroshima Literature, said, “The cultural value of the former Army Clothing Depot is high.” This is also a place where the late Goro Shikoku, an antiwar painter who called for peace, worked before he was drafted. Mr. Ikeda proposed that works of these two people be displayed at the Depot and said, “The city government should not consider it to be a foregone conclusion that buildings will be demolished, and I hope it will consider how to use the buildings in a responsible way.” Discussions from various viewpoints are necessary to lead to a conclusion that satisfies A-bomb survivors and citizens.