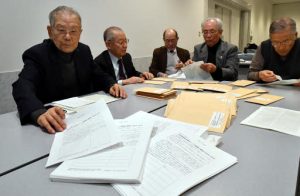 On December 18, citizens’ groups started a signature drive calling for the preservation of three buildings at the former Army Clothing Depot from supporters throughout Japan. The buildings are owned by Hiroshima Prefecture. Citizens of Hiroshima who have called for preserving the three buildings have been active since the Hiroshima prefectural government announced its draft to demolish two of the buildings (preserving only one) on December 4.

The citizens’ group is Kyu Rikugun Hifukusisho no Hozen o Negau Kondankai (The council desiring to preserve buildings at the former Army Clothing Depot), which is composed of roughly 200 volunteers throughout Japan. On December 18, seven members gathered at the Hiroshima Peace Memorial Museum, located in Naka Ward, inserted A-4 sized signature sheets into envelopes, and prepared the mailing for distribution to members. A document asking members to gather additional signatures was also enclosed.

On December 2, the council requested the prefectural government have discussions regarding how to utilize the former Army Clothing Depot with the national and city governments without demolishing the three buildings. One of the core members of the council, Hiroshi Harada, 80, a resident of Asaminami Ward and former director of the Hiroshima Peace Memorial Museum, said, “The A-bombed building that was built 106 years ago is valuable. I want to gather signatures from across Japan to pave the way for the use of the buildings.”

On December 16, the campaign to preserve and utilize warehouses at the former Hiroshima Army Clothing Depot, composed of volunteers in Hiroshima Prefecture, submitted the signatures of 11,907 people calling for preserving three buildings to the prefectural government. The signatures were gathered from home and abroad through the Internet. Three groups including the Japan Council against Atomic and Hydrogen Bombs (Gensuikyo), located in Higashi Ward, also requested the prefectural government to preserve three buildings and to secure the necessary cost on December 16.