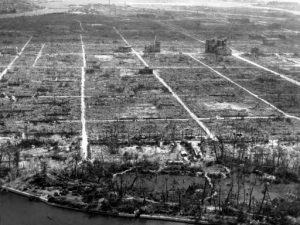 “Roof tiles and wood were blown tens of meters in the air and fell around me”
Nagatsuka Jesuit novitiate provided aid to 80 people that evening
by Masami Nishimoto, Staff Writer

It was recently learned that 16 Catholic priests and monks from overseas experienced the atomic bomb dropped on Hiroshima by the U.S. military. In this article, the Chugoku Shimbun will look back at what the Jesuit priests and monks witnessed after the atomic bombing on August 6, 1945, through their memoirs. We also have summarized their activities after the atomic bombing in list form. The global monastic order returned to Japan in 1908. In 1923, in the closing years of the Taisho era in Japan (1912–1926), the German order of the Society of Jesus dispatched a group of its missionaries to Japan, with Hiroshima serving as the base of the group’s religious activities.

Noboricho Chapel
The memoirs that Father Hugo Lassalle, Superior Regularis Missionis in Japan, contributed to the 1946 March issue of the magazine Jesuit Missions, published in New York, began with the following words: “We were able to continue record concerts every Saturday night even during the war. However, the concert held on August 4 turned out to be our last.”

On Monday, August 6, 1945, an atomic bomb was dropped on Hiroshima. The Noboricho Chapel and the parish house were located about 1.2 kilometers from the hypocenter.

“A tremendous flash was immediately followed by the deafening noise of crashing ceilings, floors and walls.” Father Lassalle rushed out of his room but was bathed in his own blood from being hit by flying glass fragments.

Father Hubert Cieslik, who had been preparing for a theology test, was able to escape from his room. He then ran to a neighboring house after hearing a woman’s screams. When he reached the house, he was told, “Please, call for someone Japanese.” She had mistaken him for an enemy soldier. Together with the head missionary, he managed to rescue her from the building by hoisting fallen wooden beams. “Many people were assumed to have burned to death in the fires only because there was no one to pull them out.” Father Cieslik wrote a book titled Hakai no Hi (Day of Destruction) in Japanese in 1968.

Father Wilhelm Kleinsorge helped Kanji Fukai, secretary of the parish house, to evacuate from the chapel, which was about to be engulfed in flames. Father Hubert Schiffer, who was severely injured, lied next to Mr. Fukai in Sentei Garden (now Shukkeien Garden). Mr. Fukai, however, later went missing.

“Roof tiles, wood, galvanized iron sheets and furniture debris were blown tens of meters in the air and fell around me… It was truly a terrible scene! And then the rain started falling. Black rain!” (From Hakai no Hi [Day of Destruction])

When the fires died down, Father Cieslik and Father Kleinsorge went back to the chapel and removed an emergency sack containing rice from the air-raid shelter in the garden. They also used food that each evacuee had brought to the chapel to prepare supper and shared it. “Common suffering has a surprising power to link people’s hearts.”

Nagatsuka Jesuit novitiate
Female workers from nearby factories, children crying for their parents, and distraught evacuees fled one after another to the monastery Nagatsuka Jesuit novitiate (now Jesus-Kai Nagatsuka Shudoin) in Gion-cho, located on the outskirts of the city, about 4.5 kilometers from the hypocenter. Father Pedro Arrupe wrote, “I immediately turned the library and the common room into spaces to treat the wounded, and we accepted as many as 80 people around evening-time.” (From the memoirs of Pedro Arrupe, rector of the monastery; published in Japan as a double issue for the 1969 July/August issue of Mikokoro no Shito [Messenger of the Sacred Heart])

At around 4:00 in the afternoon, a Japanese theological student and two kindergarten teachers of Noboricho Chapel arrived at the Nagatsuka Jesuit novitiate to notify the sisters and monks that Father Lassalle, the Superior Regularis Missionis, and other people had fled to Sentei Garden.

The priests and monks at the Nagatsuka Jesuit novitiate left and carried to a temporary aid station injured people who had collapsed along the sides of roads. They hesitated, however, about going into the city center. Being non-Japanese, they were afraid of being attacked by people who might see them and think they were spies.

Seven priests, including Father Arrupe, went to Sentei Garden carrying a stretcher made of pieces of scrap lumber. On their way, an army general, who heard them speaking a foreign language, nearly attacked them with a saber (from memories written by Father Siemes in September 1945). As he was being carried, Father Lassalle and his stretcher fell into a ditch amid the darkness. Kim Tegwan, a Catholic monk, found a cart on which to lay and transport Father Lassalle. It was not until 4:30 the following morning that they finally arrived at the monastery.

Waking from a rest, Father Siemes said Mass for gratitude, and the priests and monks started to Sentei Garden, again pushing the cart. Father Kleinsorge remained to look after injured mothers and their children. Father Cieslik took a rest at the Nagatsuka Jesuit novitiate, and on August 8, he and Father Kleinsorge went separately to search for parishioners. Both priests later suffered from acute radiation sickness.

Misasa Convent
Father Kopp, who had moved to the Nagatsuka Jesuit novitiate from Tokyo, experienced the atomic bombing together with seven nuns at the Rengoku Soeurs Auxiliatrices Misasa Convent in Kusunoki-cho, located about 2.3 kilometers from the hypocenter, after finishing Mass. The Misasa Convent, whose headquarters were located in Paris, operated a nursery even during World War II.

According to records kept at the Society of Jesus in Japan’s province in Tokyo, besides two Japanese nuns, there were three French, two Italian, and one Irish in Hiroshima at the time of the atomic bombing (the French mother superior was hospitalized in Gion-cho and died in 1947). It was not known how the non-Japanese nuns avoided internment.

Sister Kiyoko Ito, who passed away at the age of 105 in May this year, left memoirs about her experiences of the atomic bombing. Ten years after Pope John Paul II’s visit to Hiroshima in 1981, she contributed her memoirs to a collection compiled by the organization Hiroshima Association for Catholic Justice and Peace. “Father Kopp was bleeding profusely from his neck…We buried the Eucharist under an air-raid shelter and then decided to go to Nagatsuka.”

The seven sisters followed Father Kopp on foot. When they arrived at the Nagatsuka Jesuit novitiate around noon, Father Arrupe hugged Father Kopp. They laid severely burned evacuees on futons that the priests and monks had carried into the monastery, and covered their wounds with gauze, which they had moistened with a dilute boric acid solution. They took turns taking care of the injured through the night.

Sister Ito would talk about her A-bomb experiences to young people when she was asked to do so. She concluded her memoirs with the following: “I hope that my account of A-bomb experiences will remain in people’s minds as a seed of peace and that the seed will grow.” Almost all the non-Japanese nuns passed away by 2005, but one who survived the bombing is still living a heathy life in Kobe and will turn 102 at the end of this month.