Visitor number to Peace Museum in fiscal 2019 projected to reach record of more than 1.8 million people 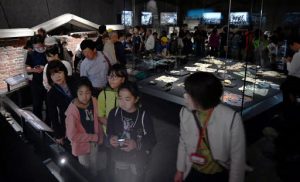 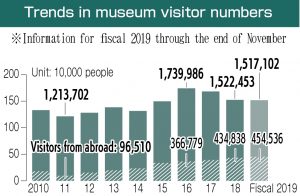 The annual number of visitors in fiscal 2019 to the Hiroshima Peace Memorial Museum, located in the city’s Naka Ward, is expected to exceed 1.8 million for the first time. That number would surpass the figure for fiscal 2016, when U.S. President Barack Obama visited, marking the first time in three years that visitor number will have reached a new record. The factors behind the increase are considered to be the April museum renovation, which drew the attention of visitors from Japan and abroad, and the continued high interest among international visitors.

Reopening on April 25 after extensive renovation, the Peace Memorial Museum reworked its exhibits to focus on the personal belongings and other artifacts of A-bomb victims. During the long 2019 holiday period (April 27 through May 6), immediately following the reopen, approximately 1.6 times as many people visited the museum compared with the same holiday period of the previous year. Each day, long lines of people waited get into the museum, leading to restrictions placed some days on entry.

According to a spokesperson at the museum’s Outreach Division, “The renovations certainly helped increase people’s interest in the museum but don’t fully explain why so many overseas travelers have visited.” On TripAdvisor, the world’s biggest travel review site, the Peace Memorial Museum was ranked as Japan’s second most popular travel destination in 2019, the same position it held in 2018. Since interest was heightened after Barack Obama’s visit in 2016, the museum seems to have established itself as a top destination to visit in Japan.

The museum now shows live images of the crowds inside the museum on its website and provides daily visitor traffic forecasts for three-month periods. The museum urges visitors to utilize these services to avoid crowds.