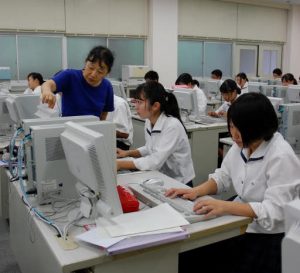 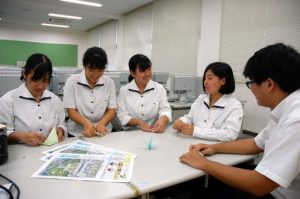 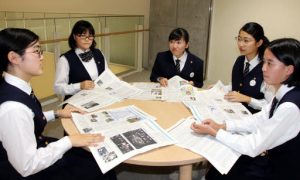 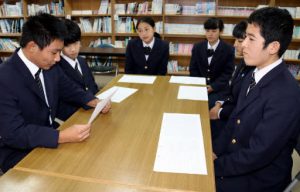 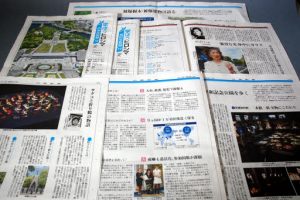 “Hiroshima Insight” is a newspaper for peace studies that is published annually by the Chugoku Shimbun. Copies of the newspaper have been distributed each year to junior high and high schools throughout Hiroshima Prefecture and the eastern part of Yamaguchi Prefecture. The newspaper, which is printed in color in a tabloid format, consists of 24 pages and carries articles that include the stories of A-bomb survivors. The newspaper is being used to engage in peace studies around August 6, the anniversary of the atomic bombing of Hiroshima as well as to give students the opportunity to think for themselves and express their thoughts.

Thirty-two second-year students, in Class 2, wrote about their impressions, in English, using computers. One student wrote, “I hope people will read the survivors’ stories and learn about what happened in Hiroshima as a result of the atomic bombing.” Another wrote, “War makes everyone sad.”

Yoshinori Kato was 17 when he experienced the atomic bombing. He was unable to rescue elementary school students who were engulfed in flames. Masako Kochi was 16 when she lost her parents and elder sister in the bombing. Students read the stories and wrote their reports in English during the summer vacation.

Atsuko Akamatsu, a part-time teacher at the high school, oversees the English class. She said to the students, “Just reading the stories should not be the end. It is important to reflect on them and respond in some way.” She also checked the grammar and vocabulary of their written work. The students’ reports were uploaded onto the website for members of iEARN, an international network for English education.

In addition to the students’ impressions, the reports include their opinions on war in general and their messages of peace. The school has received feedback from schools in such countries as Morocco and Kuwait. They said that they will have their students read the articles and the compositions that the Japanese students wrote in English. Sakurako Fujioka, 17, said, “I’m a little worried whether I can make myself understood in English, but I want to learn about other people’s views on peace.”

The students at Takamori High School also folded paper cranes and copied the peace messages they wrote in their reports on the cranes’ wings. The paper cranes will be sent to Punahou School, the alma mater of former U.S. President Barack Obama, located in the U.S. state of Hawaii. The Punahou students will then give the cranes to people visiting the USS Arizona Memorial in Pearl Harbor. Through learning about the experiences of the A-bomb survivors, the students at Takamori High School are considering war from different perspectives as well as creating opportunities for international exchange.


Yasuda Girls’ Junior and Senior High School, Naka Ward, Hiroshima: Readers share their views with reporters
“Hiroshima Insight” includes articles written by junior writers of the Chugoku Shimbun. These junior writers are students in junior high and high school. The Chugoku Shimbun interviewed some students at Yasuda Girls’ Junior and Senior High School. The students are interested in peace activities and shared their impressions of the newspaper and their ideas for peace studies.

Mai Yoshida, 16, is a first-year student at the high school. She read the stories of the eight survivors multiple times. She said, “I realized that each survivor has overcome experiences that are more horrible than we can possibly imagine and they have been conveying the importance of peace despite struggling with hardships.”

This year’s “Hiroshima Insight” carried a feature article about junior writers touring trees in the city center that managed to survive the atomic bombing. Yua Ota, 14, a third-year student at the junior high school, looked at the map that shows the locations of these trees. One cherry tree on the grounds of the school was exposed to the bombing at a distance of about 2.1 kilometers from the hypocenter. Students at the school learn about what the tree has endured. She said, “Starting with the cherry tree at our school, we were able to organize a workshop to visit survivor trees in Hiroshima.”

Atsushi Kumagai, 40, their social studies teacher, said, “I hope the students will get ideas from something that they’re familiar with, and then develop an interest in other problems of today’s world, including the current situation involving nuclear weapons.”


Akiota Junior High School, Akiota, Hiroshima Prefecture: Exchanging ideas, sending in opinions to the newspaper
At Akiota Junior High School in Hiroshima Prefecture, students used “Hiroshima Insight” for their peace studies this past summer. They wrote reports based on the articles which described the horror of nuclear weapons and what they could do to convey the importance of peace.

August 6 was a school day and 38 students from the first year to the third year were divided into 10 groups. Each group of students listened to a teacher read a survivor’s story or other article. Then the students exchanged impressions and opinions and began writing their reports.

Thinking about the survivors who were around the same age as them at the time of the atomic bombing, they wrote such things as, “If you are indifferent, it means that you have forgotten the horrors of war,” and “I hope to listen to survivors’ accounts and hand them down to future generations.” Shinya Sasaki, 15, a third-year student, said, “I was impressed by the words ‘Even though the city has been rebuilt, it is impossible to heal the emotional wounds.’ As I learned about the terrible conditions of the bombing and the hardships they went through afterwards, I imagined how I would have felt if I were them.”

The school sent the students’ reports to the young readers’ column of the Chugoku Shimbun. Satoshi Maruyama, 52, a teacher at the school, said, “By putting their ideas into writing, the students can deepen their thoughts and their learning. It is also significant that the students themselves can put out messages. I hope that each student will take this opportunity to consider what he or she can do.” Sarina Fujimoto, 15, a third-year student, said, “With the number of survivors decreasing, it is important that we learn about the atomic bombing and the war and convey this information to others.”

What is “Hiroshima Insight”?

“Hiroshima Insight” is a newspaper published by the Chugoku Shimbun which seeks to facilitate the handing down of the A-bomb experiences to the next generation. Partly supported by the Hiroshima International Cultural Foundation, the newspaper has been published every year since 2013. Some of of the contents are different for the junior high and high school levels. Focusing on survivors’ stories, a series of articles that appears in the Chugoku Shimbun, “Hiroshima Insight” also has articles on the Peace Memorial Park, the Peace Memorial Museum, and the current conditions involving nuclear weapons in the world. A total of 220,000 copies are printed and distributed for free to junior high schools and high schools across Hiroshima Prefecture and to junior high schools in 11 municipalities in the eastern part of Yamaguchi Prefecture through the newspaper’s sales outlets.