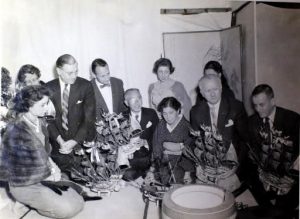 
Hope for treatment while mourning sudden death
Tomoko Nakabayashi is said to have loved the violin piece “Zigeunerweisen.” By chance, her 19-year-old sister Shigeko happened to be listening to that melody on the radio when a reporter arrived at their home in the sidecar of a motorcycle in Hakushimakita-machi (now part of Naka Ward), Hiroshima, where she and her parents were exposed to the atomic bomb.

Shigeko Inoue, 83, a resident of Suginami Ward, Tokyo, learned about her sister’s sudden death through a Kyodo news report from New York. “It was unbelievable,” she said. Her parents, who were waiting for their second daughter to return, could only say the same thing — “It’s unbelievable” — when they spoke to the many newspaper reporters that came calling.

On May 24, 1956, Tomoko underwent a third operation to remove scars from her right arm. At 3:20 p.m., she suddenly began experiencing a problem with her heart and she passed away at 9:25 p.m. (according to the August 25th issue of The New York Times). The results of an autopsy, which was witnessed by Japanese doctors, revealed that she had died of heart failure. Although Japanese and foreign newspapers reported that Tomoko was 26 years old, she was, in fact, 27 and two months.

Keiko Sasamori (née Shinmoto), who now lives in the state of California, was with some of the women who were due to undergo surgery the following day in a hospital room that was provided for the exclusive use of the Hiroshima Girls. She said, “No one could utter a word.” Ms. Sasamori has lived in the United States ever since receiving treatment there. She spoke about her experience of the atomic bombing as an A-bomb survivor in the U. S. Senate for the first time in 1980, and has continued sharing her account at churches and universities.

Tomoko had been baptized, and all the 24 Hiroshima Girls attended her mass.

“I didn’t want to undergo surgery and I was afraid of having general anesthesia. But I wanted to recover from my injuries. I experienced the love offered by people whom I was told at school were the enemy. We promised each other that we would hang in there.” Ms. Sasamori talked about her experiences in the United States without a pause when she returned to Japan to visit her elder sister this summer.

The City of Hiroshima has long preserved a series of official documents of the event with the title of “the A-bombed women having received treatment in the United States.” After Tomoko’s sudden death, Tadao Watanabe, the mayor of Hiroshima at that time, wrote in a letter dated May 26, 1956 to Norman Cousins, the man who spearheaded the project to bring the young women to the United States for medical treatment: “Her sudden death has driven her family to the depths of grief. It seems, however, that they are firmly determined to regard all that they have experienced as fate. I ask you to ensure that, after the cremation, the other women bring her ashes back with them.”

The families of the other women were also deeply shocked. On May 29, at City Hall, they listened to a detailed explanation of how Tomoko died via an international telephone call from New York. At the suggestion of the doctors who accompanied the women when they traveled to the United States, they sent a telegram that said: “We mourn Tomoko’s accidental death, but at the same time, we also hope that this important project will not collapse. With continuing faith, the families in Hiroshima.” The medical treatment then went forward, as planned.

In Japan, Heiichi Fujii, the secretary general of the Japan Confederation of A- and H-bomb Sufferers Organizations, which had just been established, went to Tokyo on June 4 to urge the Japanese government to enact the Atomic Bomb Survivors Aid Law. This legislation would cover the cost of medical treatment for the A-bomb survivors with funding from the national treasury. After Tomoko’s abrupt death, many people began calling for more support for the survivors. In the end, the Atomic Bomb Medical Relief Law came into force in April 1957.

Tomoko’s remains were returned to Japan on June 17, 1956 with the nine women in the first group of Hiroshima Girls. Tomoko’s 62-year-old father, Hajime, and her 57-year-old mother, Miharu, received Tomoko’s ashes at Iwakuni Airport where the U.S. air force plane carrying the women landed.

Shigeko, who was living with her parents, said, “I never heard my parents complain about anything.” Eiko Shinohara, 91, her sister and a resident of Mitaka, Tokyo, replied, “Is that so?” Their father died of a cerebral hemorrhage on December 15, 1956, the year he received Tomoko’s ashes.

“Tomoko should have come back alive after recuperating from her injuries. She was not only killed by the atomic bomb, but may also have been used for research.” Eiko made this suggestion to Shigeko without hiding the ill will that she cannot dismiss.

Eiko and Shigeko have never talked much about their own experiences of the atomic bombing. The reason they agreed to be interviewed by the Chugoku Shimbun was because of their endless love for Tomoko and their desire to have the horror and cruelty of the atomic bomb understood. When I visited their family plot in a suburb of Hiroshima, I found the following inscribed on Tomoko’s gravestone: “Mariya Tomoko died from A-bomb related injuries.”