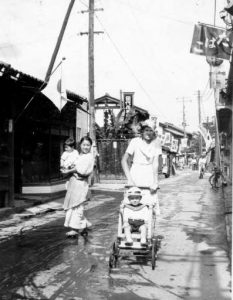 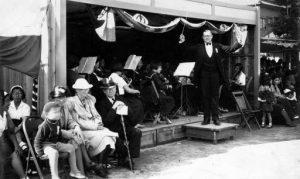 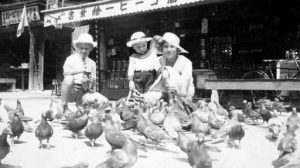 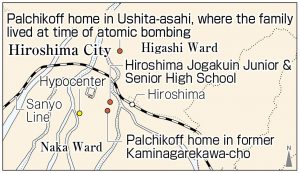 About 300 photographs of Sergei Palchikoff (1893–1969), a “White Russian” A-bomb survivor who taught music at Hiroshima Jogakuin School (present-day Hiroshima Jogakuin Junior & Senior High School, in city’s Naka Ward), have been found to be in the possession of a family member living in the United States. Many of the photos are of his family on street corners of Hiroshima taken by Mr. Palchikoff, whose hobby was photography.

Children feeding doves in front of a shop; the family in a commemorative photo taken at Sentei Garden (present-day Shukkeien Garden, Naka Ward); Kaleria, Mr. Palchikoff’s oldest daughter, pushing her little brother in a stroller. All the photos show the daily life of the family, which blended well into Hiroshima’s civic life. The photos have been kept by Anthony Drago, 70, who is the oldest son of Kaleria (died in 2014 at the age of 93) and lives in the U.S. state of California.

Many of the photos depict Mr. Palchikoff, for example, conducting an orchestra composed of female students at a school sports festival or smiling while holding in his hands the violin he regularly played. Mr. Drago discovered the photos in an album left by his mother as he prepared to publish a memoir of her and his grandfather.

According to Hiroshima Jogakuin, Mr. Palchikoff came to Japan with his wife, Alexandra, and his oldest daughter, Kaleria, in 1922 after having fled the Russian Revolution. His oldest son, Nicolay, and second son, David, were born in Hiroshima. After working as a violinist at a movie theater in the city, he taught music at Hiroshima Jogakuin School from 1926 to 1943. The family lived in former Kaminagarekawa-cho, near present-day Noboricho Elementary School (Naka Ward).

In 1943, when Japan was in the midst of fighting World War II, Mr. Palchikoff was taken away on suspicion of being a spy. Later, the family moved to Ushita-asahi (Higashi Ward), where they were exposed to the atomic bombing 2.5 kilometers from the hypocenter. The family moved to the United States after the war.

In 1986, Kaleria donated her father’s “A-bombed violin” to the incorporated educational institution Hiroshima Jogakuin, and the violin is now displayed in the history museum located on the campus of Hiroshima Jogakuin University. On August 6 last year, the A-bombed violin was played, together with an A-bombed piano, in a performance on a passenger ship operated by the non-governmental organization (NGO) Peace Boat. The piano, once the property of Akiko Kawamoto, who died in the atomic bombing at age 19, was exposed to the bombing at Ms. Kawamoto’s home.