One year after the renewal of the Peace Memorial Museum, Part 2: The only A-bombed nation 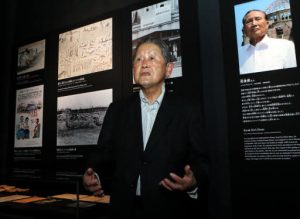 
New display casts an eye on A-bomb victims with foreign nationalities
But some argue that contents of exhibit on foreign A-bomb victims are not enough
In accordance with the completion of its main building’s renovation in April last year, the Hiroshima Peace Memorial Museum located in Naka Ward established a new section about foreign nationals who experienced the atomic bombing, under the title of “Away from Home.” In total, 16 items are on display in the section such as photos and the diary of the victims from Korean Peninsula, the Southeast Asia Special Students who were sent from Southeast countries to attend the Hiroshima University of Literature and Science (present-day Hiroshima University), and German priests, among others.

Keisaburo Toyonaga, 84, resident of Aki Ward and the adviser to the Hiroshima branch of the Association of Citizens for the Support of South Korean Atomic Bomb Victims, argued, “It was not just the Japanese who experienced the atomic bombing. So, it does not make sense that Japan regards itself as the only A-bombed nation.”


Korean victims use Japanese name under the “Soshi-kaimei” policy of the Japanese government
In the process of developing the section, Mr. Toyonaga’s group cooperated with the museum for the exhibition about Kwak Kwi Hoon, honorary president of the South Korean Atomic Bomb Sufferers Association. Mr. Kwak was drafted into the Japanese military when he was in the Korean Peninsula, then under Japan’s colonial rule. Afterwards, he was sent to Hiroshima by the military and experienced the atomic bombing. On Mr. Kwak’s copied military pocketbook included in the exhibit, “Tadahiro Matsuyama,” the Japanese name he was forced to use under the “Soshi-kaimei” policy of the Japanese government, is written.

According to Hiroshima and Nagasaki, a volume compiled by the cities of Hiroshima and Nagasaki in 1979, it is estimated that about 25,000 through 28,000 people from North and South Korea experienced the atomic bombing in Hiroshima. In the museum’s east building, there are some exhibits which have touched on growth history of Hiroshima as military city and mobilization of Koreans to work at public and private sectors in Japan, but from Mr. Toyonaga’s perspective, the exhibits are still not sufficient. He said, “We should not forget that Korean victims were forced to experience the atomic bombing because of the Japanese government’s policy.”

The Japanese government has proclaimed itself to be “the only A-bombed nation” in and outside Japan. On the occasions of the Peace Memorial Ceremony taking place in Hiroshima on August 6 every year, all past prime ministers in Japan, regardless of the political party they belong to, have used this wording in their speech and advocated for a world without nuclear weapons.

Similarly, at the Preparatory Committee for the 2020 Nuclear Non-Proliferation Treaty (NPT) Review Conference held at United Nations headquarters in New York in spring of last year, Japan’s government representative said, “Japan is the only A-bombed nation,” and then added, “We show our respect to A-bomb survivors who continue to convey what the atomic bombing has brought about to them.”


North Korean A-bomb survivors are not covered in the exhibition at all
Kim Yeongho, a professor from Hiroshima City University who specializes in politics and international relations, referred to the fact that Sadako Kurihara, a poet known for her A-bomb-related work, had criticized the use of the “only A-bombed nation” to describe Japan early on. Mr. Kim then said, “It’s important for us to recognize what has been removed from memories in the A-bombed city.” He is concerned the museum’s renewed exhibition has no description about A-bomb survivors living in North Korea, a country with which Japan doesn’t have diplomatic relations.

When the museum renewal was carried out, a series of discussions were held to review the contents of exhibits by experts and A-bomb survivors. Museum staff said, “We are going to make further improvements in the future as required.” Mr. Kim showed his expectation, by saying “I hope vibrant discussions are held among citizens regarding the museum’s exhibits as well.” In order for us to talk about “Hiroshima” as a citizen of the A-bombed city, the museum gives us a lot of clues in revisiting the significance of every individual word told by A-bomb survivors.