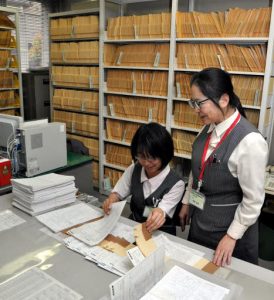 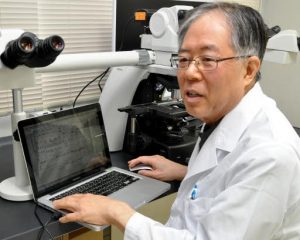 
Digitizing medical records over 20 years
The atomic bombings released thermal rays, blast, and large amounts of radiation. A-bomb survivors are forced to worry about health throughout their lives, fearing the risk of aftereffects such as cancer or blood disease from exposure to A-bomb radiation. At medical institutions that treat A-bomb survivors, large volumes have accumulated over time of medical chart information and health screening data serving as records of follow-up of each of the survivor’s health.

The Hiroshima Atomic Bomb Casualty Council, located in Hiroshima’s Naka Ward, is a hub institution that provides health examinations to A-bomb survivors. Medical records of a total of about 188,000 patients are squeezed onto shelves. According to Toshiro Omosako, 59, chief of the general affairs department, some of the records appear to be medical charts dating back to 1953. That was four years prior to enactment of the Atomic Bomb Medical Relief Law (now the Atomic Bomb Survivor’s Relief Law), which mandates regular health examinations for survivors. In this way, the charts are “physical evidence” demonstrating that local doctors made every effort for the survivors, who were not provided aid during the occupation of Japan or even after the country had recovered its independence.

Although the record-retention period under the Atomic Bomb Survivor’s Relief Law is “five years,” the casualty council organization stores all of its records. “Our mission to keep all the record like our predecessors did before us,” said Mr. Omosako.

With that, however, continually increasing document volume could become a burden. The Hiroshima Red Cross Hospital & Atomic-bomb Survivors Hospital (Naka Ward) has digitized the medical records of 54,000 survivors who visited the hospital between 1955 and 2000 as outpatients. Two years ago, after 20 years of work, the database digitization was completed.

When the hospital decided to dispose of a stack of paper charts, Megumu Fujiwara, 63, head of the hospital’s Department of Diagnostic Pathology, proposed they be digitized. The digitized records include a brief summary of about 100 Japanese characters regarding how the patients were exposed to radiation. A multiple-choice system was used to record nine symptoms, including diarrhea, hair loss, and bleeding, as well as degree of “radiation sickness,” to make it easier to conduct statistical analysis.

Dr. Fujiwara himself utilizes the database for his research into the relationship between whether acute symptoms of radiation sickness were present immediately after the atomic bombing and A-bomb survivor lifespan after the bombing. Surprisingly, he indicated that the database will not be used only for academic research purposes. “I would also like people to use the database to pass on the A-bomb experience,” he said. The hospital plans to respond to the extent possible to requests from survivors or their family members to access their records.

With that in mind, we asked Meiko Kurihara, 93, Asakita Ward, to obtain a copy of her first medical examination 58 years ago. According to the health examination record, “The examinee walked all over the city for 10 days looking for her father, sleeping at night on a sports field at Hiroshima University.” She also apparently suffered such acute symptoms as bleeding from her gums and slight hair loss.

In response to finding her own medical records, Ms. Kurihara was excited. “My A-bomb experience will be passed on to the next generation,” she exclaimed. She hopes that such information can prove useful to bereaved families of A-bomb victims who visit the Hiroshima National Peace Memorial Hall for the Atomic Bomb Victims (Naka Ward).

Minoru Hataguchi, 74, an in-utero exposed survivor, served as former director of the Hiroshima Peace Memorial Museum and also as secretary-general of the Hiroshima Atomic Bomb Casualty Council. In his position, he personally saw huge volumes of such records stored at the organization. He came to believe in sharing such information among universities, research institutions, and medical institutions. Said Mr. Hataguchi, “By comparing the prodigious amounts of data, such as age, location of radiation exposure, and illnesses, we may be able to see things we can’t now.”

Essential for all those concerned is working in close cooperation to connect the scattered materials and prevent them from being lost. However, medical records are also kept in the hands of the private sector, and thus this might not be such an easy task.

Ran Zwigenberg, 43, historian and assistant professor at Pennsylvania State University in the United States, has been exploring the damage on survivors caused by the A-bombings from the aspect of the history of mental health. Trying to shed light on the late Masuho Konuma, professor emeritus at Hiroshima University, Dr. Zwigenberg visited Hiroshima last year to search for medical records or notes in the late professor’s handwriting.

Dr. Konuma apparently started to study the psychological effects of experiencing the atomic bombing soon after the war and published his research findings in 1953. Even Robert J. Lifton, an internationally renowned American psychiatrist, did not start fact-finding research based on interviews in Hiroshima until 1962.

However, Dr. Zwigenberg has not been able to find any materials he imagined would be left by Dr. Konuma at medical institutions in Hiroshima City or at Hiroshima University, which were thought to be possible facilities for storage. He regrets that it has become increasingly difficult to verify the history from the A-bombed city’s perspective. According to Dr. Zwigenberg, it is unfortunate but not so uncommon a situation for researchers to be forced to depend on archives in the United States because they cannot find necessary information in Japan, not limited to studies related to the atomic bombings.