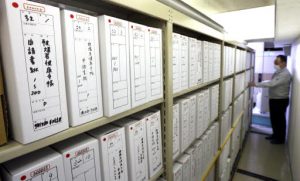 
Atomic Bomb Survivor’s Certificate applications should be protected with storage-period criteria as “historical documents”
Based on the former Atomic Bomb Medical Relief Law, issuance of Atomic Bomb Survivor’s Certificates started in 1957, following a “void” during which A-bomb survivors received no support from the national government. A small booklet with a purple cover is required when A-bomb survivors receive benefits or undergo free medical examinations.

An application for the Atomic Bomb Survivor’s Certificate contains questions about the applicant’s situation at the time of the atomic bombing, names of family members who were exposed to the bombing, and date of death. Some of the questions to the applicants are, for example, “What were your circumstances when the atomic bomb was dropped?”; “What did you do after the atomic bombing?”; “What were the circumstances of your family members?” The application form was simpler at the start than it is today, but applicants began to be asked detailed information around 1968, when the former Atomic Bomb Survivors Special Measures Law was enacted.

In the late 1980s, more than 372,000 A-bomb survivors nationwide, the largest number ever, held the certificate. It can be said that the applications for the certificate are incomparable A-bomb-related materials. However, the storage conditions of these materials are far from stable.

The certificate falls within the jurisdiction of Japan’s Ministry of Health, Labour and Welfare, but the 47 prefectures of Japan and the cities of Hiroshima and Nagasaki are entrusted with the task of accepting the applications, conducting screening, and ultimately issuing the certificate. There are no uniform criteria for long-term storage of the documents. Takehiro Ono, director of the ministry’s A-bomb Survivors Support Office, said, “The country has never told local authorities how to store the official documents, as each local government has its own ideas.”

Storage period: “Five years” or “Permanent” depending on local authorities

Two prefectures responded that they “Dispose of the applications after the document storage period expires.” According to the office in charge in Aomori Prefecture, the document storage period is basically “Five years,” with a considerable number of applications having already been thrown away, although some from 10-to-15-years ago remain. Yamanashi Prefecture answered that they “Dispose of the applications after 30 years of storage.” Both prefectures keep a “Register” into which basic information is copied in accordance with enforcement regulations of the Atomic Bomb Survivors Relief Law presently in force.

The remaining prefectures indicated in the survey that they “Have not disposed of” the materials. At least seven prefectures responded that they “Cannot locate the dated applications.” Forms prior to 1974 are missing in Gunma Prefecture, for example, as are some of those received before 1984 in Kagawa Prefecture.

Several of the local governments responded that they “Have not decided what to do with the applications in the future.” Hyogo Prefecture, which has extended its “30-year” document storage period, indicated that, “We need to review how to handle the documents once all the A-bomb survivors in the prefecture are no longer here, when the associated administrative work is no longer necessary.” Kanagawa Prefecture, which adopts the same “30-year” storage rule, holds the same view. Both prefectures once had more than 6,000 A-bomb survivors in possession of the certificate. The future of many documents in different regions throughout Japan related to survivors could, in this way, be up in the air.

The materials are vanishing in the absence of a consistent policy by the national government. Satoru Ubuki, 73, former professor at Hiroshima Jogakuin University, warned, “Both the national and local governments should hold on to the applications as ‘historical documents.’ They are not simply scraps of paper, even if they are no longer needed from an administrative standpoint.”

Disposal of applications for the Atomic Bomb Survivor’s Certificate would mean the loss of important documents that can be used to fill the various “voids” that exist in terms of the reality of the damage caused by the atomic bombings.

The number of A-bomb victims who died by the end of 1945 in Hiroshima has been estimated at 140,000, plus/minus 10,000. The Hiroshima City government persists in conducting its Statistical Survey of Atomic Bomb Victims, which is based on confirmation of the full name of each victim. As a result, 89,025 names were identified as of the end of March 2019.

Applications for the certificate have been an important source of information for the survey. However, only those in the custody of Hiroshima City and the dated certificates held by Hiroshima Prefecture have been fully utilized. The documents stored outside of Hiroshima have not yet been incorporated into the survey, with only the results of nationwide surveys of holders of the Atomic Bomb Survivor’s Certificate carried out reluctantly by the national government in 1985 and 1995 being reflected in Hiroshima City’s survey.

The applications could provide clues into the A-bombing situation of the survivors who did not leave accounts while alive of their experiences. Although the applications are only disclosed to the applicant and limited members of the family, “We need a system to preserve the documents with which citizens, 100-to-200 years from now can trace the history of family members who experienced the atomic bombings,” said Mr. Ubuki. He proposes that all Hiroshima A-bombing documents be gathered together in the Hiroshima National Peace Memorial Hall for the Atomic Bomb Victims in the city’s Naka Ward.

Now called for is a non-patchwork system of document management that takes on history with integrity.