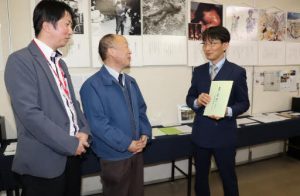 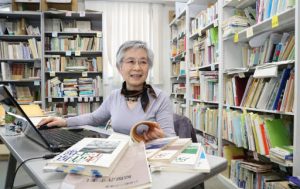 by Yo Kono and Minami Yamashita, Staff Writers


Materials showing paths of regional survivor groups are irreplaceable
Now is critical point for stopping materials from being lost
The civic cooperative association Nara Co-op, located in the city of Nara, Nara Prefecture, has opened a facility called the Co-op Fureai Center Rokujo, as a base for local residents’ activities. The Nara Co-op Peace Library, where co-op members and children often gather and carry out different activities, was established in one of the facility’s rooms in the fall of last year.

The peace library carries 300 items, including newsletters of an A-bomb sufferers’ association in Nara Prefecture (Wakakusa-no-Kai), which disbanded in 2006, and three volumes of A-bomb accounts of 63 survivors, compiled by the association, as well as picture books conveying the importance of peace.

Starting around 2015, Masanao Iritani, 46, a resident of Nara City, collected the materials by visiting A-bomb survivors and their surviving families in Nara. Mr. Iritani said, “The materials reminded me that the survivors struggled and managed to live with emotional scars.” The Nara Co-op, which has so passionately engaged in peace activities, provided a space for him to preserve the items.

Mr. Iritani was born in Hiroshima City and moved outside Hiroshima Prefecture when he was one year of age. He and his mother used to visit his grandmother’s home in Hiroshima every summer. For that reason, what had happened in Hiroshima felt familiar to him. He now works as a chief engineer for the Institute of Fine Arts National Treasure Repair Center in Kyoto. On a 2012 project to restore the main hall (Kondo) at Fudo-in Temple, the A-bombed building and national treasure located in Higashi Ward, Hiroshima, he was responsible for restoration of the Yakushi Nyorai statue, a seated, wooden Buddhist figure designated as a national important cultural asset.

He wanted to connect his work in Nara with the A-bombed city of Hiroshima. At first, he looked into A-bomb survivors who lived in Nara. When he paid visits to the survivors who were members of Wakakusa-no-Kai or their bereaved families, many had already disposed of documents once in their possession. He thus became aware first-hand of how the materials could be dispersed and lost.

Mr. Iritani was certified as one of the “memory keepers,” who convey A-bombing experiences on behalf of A-bomb survivors, after repeatedly traveling to Hiroshima over the span of three years to undergo training by Hiroshima City. “I want to keep a record of every A-bomb survivor’s life and pass it down to future generations,” said Mr. Iritani. With that, he has continued to collect materials related to the atomic bombings and interview the survivors about their A-bombing experiences. Yone Inoue, 90, a resident of Nara who experienced the atomic bombing when she was a fourth-year student at Hiroshima Jogakuin High School, said that “Mr. Iritani and Nara Co-op play an important role for A-bomb survivors.”

The written materials owned by A-bomb survivors’ associations throughout Japan represent a record of activities by the survivors who supported each other in places distant from Hiroshima and Nagasaki, and can be characterized as historical information that traces the post-World War II movement of A-bomb survivors. Now is a critical point, at which such materials can be handed down to the next generation. The average age of A-bomb survivors who have Atomic Bomb Survivor's Certificates was 82.65 years as of the end of March 2019, and one after the other, regional survivors’ associations are being disbanded.

Haruto Kajikawa, 92, is former chair of an A-bomb sufferers’ association in Setoda (part of Onomichi) that was disbanded about 15 years ago. Early this year, Mr. Kajikawa incinerated most of his former group’s materials, including a prospectus for erecting a cenotaph and a blueprint of its design. “I believe I have fulfilled my role by establishing the cenotaph to represent the regrets of victims,” said Mr. Kajikawa. For the elderly, it remains a big job to organize the accumulated documents and find someplace willing to take over the materials.

Mr. Iritani understands such a situation and has referred people to a non-profit organization (NPO) they can reach out to when difficulties arise in storing the documents. The NPO group, which was established by such founders as author Kenzaburo Oe in December 2011, works to hand down the memory and spirit of “No More Hibakusha.”

NPO can take over materials

The Chugoku Shimbun visited a materials room in the Minami Ward area of Saitama City, one of the NPO group’s bases. Surrounded by stacks of books and documents, Toshie Kurihara, 73, a staff member of the group’s secretariat who lives in Arakawa Ward, Tokyo, said, “It would be sad if survivor groups’ materials were lost as a result of a group’s disbanding, bringing that history to an end. We have to create a place from which such information can be passed down to the next generation.” For about 10 years starting in 1980, Ms. Kurihara worked as a member of the secretariat staff of the Japan Confederation of A- and H-Bomb Sufferers Organizations, a national organization of A-bomb survivors’ associations.

Her group has collected and stored about 10,000 documents such as collections of A-bomb survivors’ testimonies and materials consigned by the Japan Confederation or individuals. The group has also been seeking donations to build a “memory-keeping center” where such materials and documents can be accessed by users.

The group has supported Mr. Iritani’s activities as a model case of passing down materials to the next generation and has aggressively played a role in the effort to stop materials from being scattered or lost. It has received newsletters and other documents from two survivors’ groups that were disbanded, one in Wakayama Prefecture in 2015 and the other in Tochigi Prefecture in 2018.

Materials left behind by A-bomb survivors at various locations in Japan are irreplaceable assets that the Hiroshima and Nagasaki Peace Memorial Museums do not possess. Ms. Kurihara said, “The materials must be handed over to the future generation through collaboration between the private sector and the national government.” However, no financial support is provided by the government. The reality is that such activities have been supported by the hard work of citizen volunteers.