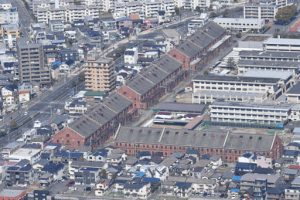 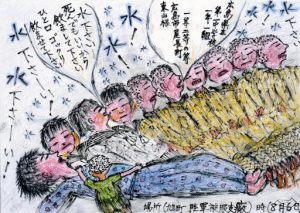 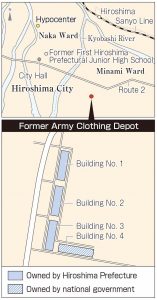 
National, municipal governments also have notes, personal belongings that should be passed on with buildings
The former Army Clothing Depot, located in Hiroshima’s Minami Ward, consists of four huge warehouses standing in an L-shaped configuration. The outer walls of the buildings, built in 1913, are made of red brick. Located 2.7 kilometers from the hypocenter, the depot buildings were not burned down and became a temporary relief station immediately after the atomic bombing. The depot, from where troops were dispatched to overseas battlefields, also speaks to Hiroshima’s past as a military city.

The Hiroshima prefectural government owns three of the four buildings. In December last year, the government announced its draft to preserve the outer appearance of building No. 1 and to demolish buildings No. 2 and No. 3., citing such reasons as deterioration. The national government owns the other building, but it has been reluctant to preserve it. One citizens group is strongly urging that all the buildings be preserved. To impart the historical value of the four buildings, the group published a booklet in March. The publication’s title can be translated as “Red-brick Warehouses Pass Down Stories.”

In compiling the booklet, the group asked citizens for materials related to the depot. Tatsuro Naito, 78, secretary-general of the group, said, “I was surprised that so many materials we knew nothing about were sent to us.” One photograph of the inside of the army uniform factory conveys the atmosphere of this sewing factory where several thousand people used to work before the war. Another photo taken during the post-war restoration period shows students using the building as a classroom after their school buildings had been destroyed in the atomic bombing.

National and municipal organizations also own many materials related to the depot.

The Hiroshima National Peace Memorial Hall for the Atomic Bomb Victims has in its possession more than 600 notes written by survivors about the clothing depot. “There was a flash when I was playing with sand at the clothing depot’s nursery,” wrote a man who was three-years old at the time of the bombing. “A young Korean boy cried, asking his elder sister to fan him with a hand fan,” wrote a woman who was a 19-year-old factory worker at that time. Most of these notes were obtained during a fact-finding survey of A-bomb survivors conducted by the national government in fiscal 1995.

Many people with “experience”

Kept in the storehouse of the Hiroshima Peace Memorial Museum, located in Naka Ward, are many “actual materials,” including shredded gaiters and trousers worn by a student whose severely burned corpse lay at the depot. The museum also has 14 “A-bomb Drawings by Survivors,” created later by survivors. One of the images illustrates scenes of the victims’ bodies being cremated. The museum also preserves a diary written in those days by poet Sankichi Toge, who described terrible scenes at the depot in his writings titled Soko no Kiroku (Records of the Warehouse).

The municipal government of Hiroshima has 86 structures registered on its list of buildings that survived the atomic bombing. The clothing depot seems to be one of the few such buildings of which so many materials exist from before the war through the post-war period after the atomic bombing. The depot was a huge facility that many people used, which is why there are so many people with direct “experience” of the depot.

The prefectural government estimated that it would cost 3.3 billion yen to fully quakeproof each of the buildings and utilize the interiors, but 400 million yen to preserve only the outer appearances. The citizens group now urges the national, prefectural, and municipal governments to further their collaboration, not only in terms of securing a sufficient budget to preserve the buildings. The group encourages the three governments to be aware that they, with their materials related to the facilities, are parties to this issue and calls on them to come up with a way that the depot can be passed on to various people, including Hiroshima citizens, visitors to Hiroshima from Japan and overseas, as well as future generations.

The prefectural government’s draft is to preserve the outer appearance of building No. 1, which is furthest north, and to demolish buildings No. 2 and No. 3. The three buildings may seem to be similar kinds of warehouses, but unique memories of the war and the atomic bombing have been etched into each of them.

All former students who were at the depot emphasize the horrifying scenes they witnessed in building No. 2 after the atomic bombing. “There were wounded all over the place, and there was no room to stand,” indicated one. In addition, “There were vomit and excreta and marks of diarrhea everywhere,” and “People died one after another.” At the time of the bombing, first-year students of First Hiroshima Prefectural Junior High School (now Kokutaiji High School located in Naka Ward) were brought to the empty building and laid on straw mats.

Yasuko Sato, 92, engaged in relief work at the time. She depicted students breathing weakly in her drawing included among the A-bomb Drawings by Survivors. Interviewed by the citizens group, Ms. Sato, a resident of Hatsukaichi, said, “With their entire bodies burned, they were not decently attired. I felt so sorry for them that I drew them neatly dressed.” She explained that even now she is stricken with grief when she recalls the boys’ cries of “Please give me water” echoing around the warehouse.

There are voluminous notes, images, and personal belongings of victims who were at the depot on that fateful day. If people can experience such history at the “actual site” in the warehouses that survived the atomic bombing, they would be able to truly come to an understanding of what happened there. Citizens must join forces with the three levels of governments and focus their intelligence together to make this possible.