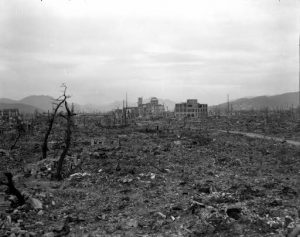 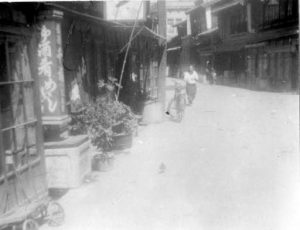 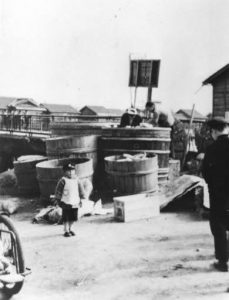 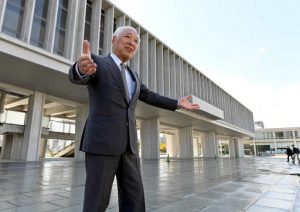 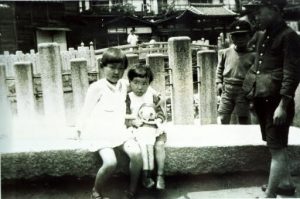 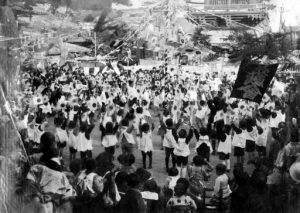 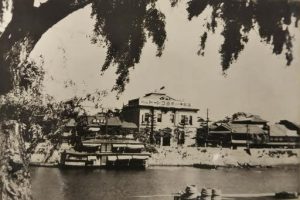 
Lively traditional neighborhood is now place for prayers
The southern half of Hiroshima Peace Memorial Park once consisted of the neighborhoods Zaimoku-cho, Tenjin-machi Kitagumi, and Motoyanagi-machi. The area is now the site of the annual Peace Memorial Ceremony, held on August 6. About 50,000 people, including delegates from countries around the world and local citizens, gather in and around the verdant park to attend the ceremony. Tourists pray in front of the Cenotaph for the A-bomb Victims and, in the Peace Memorial Museum, learn about what happened in Hiroshima on that day. What were people’s lives like here, however, before that day 75 years ago?

Going to movie theater with older sister, but memories end with atomic bombing

The main building of the Peace Memorial Museum is situated east to west and is a raised-floor structure supported by columns. Taking advantage of the opportunity presented by the building’s renovations and seismic reinforcement, excavation of the space underneath the floor started in November 2015, lasting for about 17 months. When paving stones were removed, the “sealed” ruins of a fire-devastated area appeared. Uncovered were a charred rice scoop and melted milk bottles, among other items. Also discovered was an inkstone on which the name “Keisuke Imanaka” was engraved.

“I didn’t tell people for a long time that I was born and raised here,” said Keisuke Imanaka, 84, a resident of Asaminami Ward, standing at the northeastern side of the museum’s main building.

Mr. Imanaka was raised by parents who ran the trading company Imanaka Shokai, located on Zaimoku-cho-suji street, which ran mostly north-to-south along the present-day main building of the museum and the grassy peace park. He attended Seiganji Temple’s Mutoku Kindergarten, not far from his home. He enjoyed walking on stilts on the temple grounds and testing his courage at its gravesite. The area retained the energy of a traditional downtown neighborhood.

In the spring of 1945, the Imanaka family were evacuated to the village of Yagi (now Asaminami Ward) for the sake of safety. On August 6, Mr. Imanaka’s sister, Hiroko, then 17, left home in the early morning to go to work at the Hiroshima Branch of the Sumitomo Bank, located in the Kamiya-cho area, which is now part Naka Ward. Her whereabouts since then, however, remain unknown. Mr. Imanaka’s father, Keizo, then 49, went out in search of his daughter. He died two months later after suffering from acute symptoms resulting from exposure to A-bomb radiation. Their home, which Mr. Imanaka described as “standing out because of its western style,” burned to the ground.

Hiroko was very active. In those days, a female student going to a movie theater alone was taboo. So, she brought her young brother Keisuke with her to a theater in the Nakajima Honmachi area, not far from their home. “My brother wants to see the movie,” she said as they entered. Mr. Imanaka describes one of the few memories he has of her: “She bought me one-penny Western food so I wouldn’t tell our parents.”

One of Hiroko’s classmates still carefully keeps a photograph of Hiroko. Masako Takahashi, 91, lived in Zaimoku-cho and, with Hiroko, attended Hiroshima Girls’ Commercial School (now, Hiroshima Shoyo High School). The commemorative photo shows them in their school uniforms. Their smiling faces are an indication of their friendship. Ms. Takahashi now lives in Kawaguchi, Saitama Prefecture.

Ms. Takahashi was not in good health, often laid up in bed when young. Hiroko was kind and would drop by to see Ms. Takahashi when she was feeling poorly. At the time of the atomic bombing, Ms. Takahashi was at her grandmother’s house in Okayama Prefecture and thus not directly exposed to the bomb. But her family’s company handled military supplies, meaning her sister, Hamako Inoue, then 21, and the employees working on site at the time died. After the war, Ms. Takahashi joined an A-bomb sufferers’ group in Saitama and has continued to convey her experiences of the atomic bombing both in Japan and overseas.

When this reporter showed a copy of Ms. Takahashi’s photo, Mr. Imanaka said, with surprise, “I didn’t expect that such a clear photo existed.” That prompted him for the first time to contact Ms. Takahashi. While listening to Ms. Takahashi talk about his sister, he realized once again “how cruel the atomic bombing was to rob my sister of her youth.”

The atomic bomb exploded right above the former Nakajima district. Many families who lived near the Imanaka’s were annihilated. After he was “reunited” with his inkstone, which had lain underground, he also began to speak about his experiences in the atomic bombing.

About 150 other photos of the former Nakajima district and its surrounding area will be released on the website “Striving to fill voids in Hiroshima: Recreating cityscapes.” Please send us any photos you might have of Hiroshima from before the atomic bombing, at: https://hiroshima75.web.app/