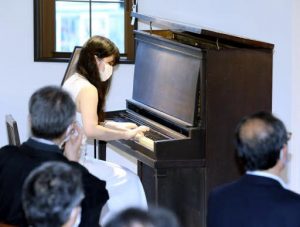 The renovation work at Rest House, an atomic-bombed building in the city’s Naka Ward, which receives domestic and international tourists, has been completed. On June 30, a completion ceremony of Rest House was held, and attended by about 30 people including A-bomb survivors and construction workers. Rest House reopens July 1, and conveys the damage as a result of the atomic bomb to those who visit Hiroshima Peace Memorial Park.

The ceremony was held on the second floor, where a piano exposed to the atomic bombing would be exhibited permanently. The piano was cherished by Akiko Kawamoto, who died at the age of 19 from injuries due to the atomic bombing. Mami Hagiwara, a pianist from Asaminami Ward, played pieces of music that included work from Chopin and Schumann, and the “Hiroshima Peace Song,” which is sung on the occasions of the Peace Memorial Ceremony that takes place in Hiroshima on August 6.

Prior to the performance, Hiroshima Mayor Kazumi Matsui said at the ceremony, “Rest House will be a facility where we share our desire for peace with visitors and convey the catastrophic consequences of the atomic bombing.”

At the preview event following the ceremony, the attendees looked at the exhibits on the third floor and in the basement. Kensuke Ueki, 75, a resident of Nishi Ward and an honorary professor at Hiroshima University who called for the preservation of Rest House in the 1990s, said, “I hope that Rest House will play a role different from Hiroshima Peace Memorial Museum as an A-bombed building.”