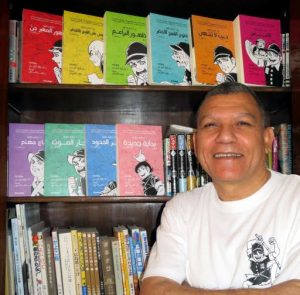 
Started work on translation while exchange student at Hiroshima University
Barefoot Gen, created by the late manga artist Keiji Nakazawa, is the story of a boy who lived in Hiroshima after the city was devastated in the atomic bombing. Maher Elsherbini, 60, a professor at Cairo University who specializes in the Japanese language, spent five years translating into Arabic all 10 volumes of Barefoot Gen, which was recently published in Egypt.

Professor Elsherbini started to translate the manga series when he was an exchange student at the Hiroshima University Graduate School of Letters, where he obtained a doctorate degree in 1992. He decided to translate the series of manga to inform people in his home of Egypt about the true consequences of the atomic bombing, after visiting Hiroshima Peace Memorial Museum and the A-bomb Dome.

Thinking Barefoot Gen would also be understandable for children, he published his translation of the first volume of the series in January 2015. In May of the same year, four months after publication, he came to Hiroshima as a specially appointed professor at Hiroshima University. During his one-year stay, he continued the translation work while conducting his own research projects.

“Some of the terms were especially difficult to translate, such as a sutra that Gen, the main character of Barefoot Gen, chanted to console the souls of the A-bomb victims, or the sound of geta,” he said as he reminisced about that time. With advice from other professors, he finally completed translation of all the volumes in April 2016 and returned to Egypt. After multiple revisions, he managed to publish all 10 volumes of the series in February this year.

The Arabic edition is sized a bit larger than Japanese B6 paper, and the price is 90 Egyptian pounds (about 600 yen) per volume. Based on support from Project Gen, a Kanazawa City-based citizens’ group, headed by Kiyoko Nishita, copies were donated to local public libraries and schools in Egypt. Professor Elsherbini said, “People in the Middle East are familiar with war. I want them to know what kind of damage would result were a nuclear weapon to be used and to fully understand the preciousness of peace.”