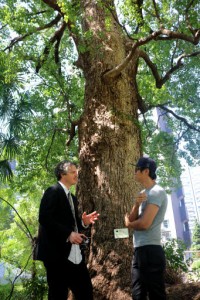 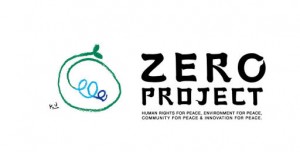 Cannon Hersey, 40, an artist based in New York and the head of “1Future,” a non-profit organization in the United States, has begun to create works of art featuring the A-bombed trees that have endured in Hiroshima. Mr. Hersey’s pieces will be displayed at an art exhibition titled “Mirai-ju (Future Tree) – Resilience,” which will take place at Komachi Art Place, in Komachi, Naka Ward, from October 27.

This art work is part of the Hiroshima Nagasaki ZERO project, which will hold its first event in Hiroshima on October 29 with support from the Hiroshima International Cultural Foundation. The pieces will include works done in collaboration with Akira Fujimoto, 42, an artist living in Tokyo.

So far, Mr. Hersey and Mr. Fujimoto have photographed trunks and leaves of the A-bombed trees, including the A-bombed camphor tree that still stands in Motomachi, Naka Ward. About 10 pieces, made from materials that include photos, silkscreen, and paper recycled from paper cranes, will be exhibited.

Mr. Hersey is the grandson of John Hersey, a journalist who wrote the book Hiroshima, which reported on conditions in Hiroshima in the year after the atomic bombing. The upcoming peace event, as envisioned by Mr. Hersey, will focus on the environment as one of the key themes, including the A-bombed trees. He said with enthusiasm that the art work which conveys the A-bombed trees, survivors that generated new life in the aftermath of the atomic bombing, can give hope for a better future to the people of today and help the world face environmental challenges.

The exhibition will run until November 10 and admission is free. Mr. Hersey’s process of creating the art work is being shared on 1Future’s Facebook page. For more information, please see: https://www.facebook.com/presentsNYF/