Former U.S. Secretary of Defense speaks, via Internet, with young people in Hiroshima about nuclear abolition 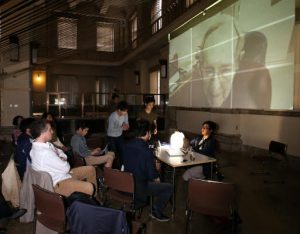 On October 14, a workshop was held in Hiroshima where young people discussed the challenges of nuclear abolition with former U.S. Secretary of Defense William Perry, 91, via the Internet. Mr. Perry expressed his support for a world without nuclear weapons and inspired former U.S. President Barack Obama to advocate this goal. The event was held at the former Hiroshima Branch of the Bank of Japan.

Mr. Perry held an hour-long discussion with people in their twenties from in and around Hiroshima. Mr. Perry, who was involved in creating nuclear policy for the U.S. government, holds a wealth of knowledge about the nuclear arms race during the Cold War. He is now committed to disarmament education. He told the participants that it is a false assumption that the more nuclear weapons a nation has, the safer that nation will be. He asked the participants to understand that the danger of nuclear weapons is growing and to spread this warning.

Tetsu Furukawa, 23, a postgraduate student from Sanda, Hyogo Prefecture, said, “I was inspired when Mr. Perry raised a fundamental question about the idea of nuclear deterrence itself. I will continue to explore what I should do to understand those who have different ideas about nuclear weapons and discuss this issue with them.”

The event was held on the last day of the Hiroshima Nagasaki ZERO Project, which is partly sponsored by the Hiroshima International Culture Foundation. Cannon Hersey, 41, an artist who initiated the project, also took part in the discussion. His grandfather John Hersey wrote Hiroshima, a reportage that described the horrifying devastation of the atomic bombing.