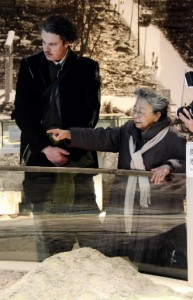 Cannon Hersey, a New York-based artist, made his first visit to Hiroshima Peace Memorial Museum on March 6. Mr. Hersey is the grandson of the American journalist John Hersey (1914-1993), who wrote Hiroshima, which was published in 1946 and was one of the first reports on the devastation in the city wrought by the atomic bomb. Seeking ways to convey his grandfather’s focus on the bombing to future generations, Mr. Hersey arrived in Hiroshima on March 5.

On March 6, Mr. Hersey met Koko Kondo, the daughter of Kiyoshi Tanimoto, who was featured in Hiroshima. Mr. Tanimoto was a pastor at the Hiroshima Nagarekawa Methodist Church. (He died in 1986.) During their 30-minute tour of the museum, they viewed a panoramic model that depicts the city in the aftermath of the atomic bombing, the exhibit “Human Shadow Etched in Stone,” and roof tiles that were damaged by the bomb’s heat rays. Ms. Kondo, a resident of Miki, Hyogo Prefecture, was eight months old when the atomic bomb was dropped on Hiroshima. She told Mr. Hersey how Hiroshima described her father’s experience of the atomic bombing and how she suffered from bleeding and high fever, the symptoms of acute radiation sickness.

Mr. Hersey said that he should focus more on people’s suffering than on his grandfather’s work. He will be in Hiroshima until March 9, then visit Nagasaki on March 10 and 11.

Mr. Hersey creates works of art that include pictures and block prints which make use of photographic images. At the end of March he will create pieces at art workshops to be held in Hiroshima and Nagasaki by Japanese and American pacifist groups. He said he hopes to deliver, through art, a strong message for a future without nuclear weapons.

The workshops will be videotaped by Taku Nishimae, 52, a New York-based filmmaker who is accompanying Mr. Hersey, and assembled for a documentary film.

Hiroshima, by John Hersey
Hiroshima is a reportage written by John Hersey based on interviews with six A-bomb survivors, including the Reverend Kiyoshi Tanimoto. When it was published in The New Yorker in August 1946, the magazine reportedly sold 300,000 copies in one day. The Japanese version of the book was published in 1949. The current version of the book includes a chapter titled, “The Aftermath,” which he added after visiting Hiroshima again in 1985.