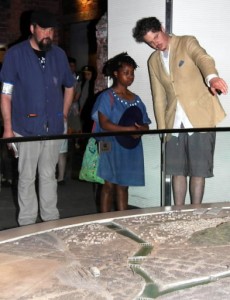 On July 11, 10 young people from Japan, the United States, and South Africa began a workshop in Hiroshima in which works of art are created in the A-bombed cities to send out wishes for peace. The project is being led by Cannon Hersey, 39, an American artist and the grandson of the late John Hersey, an American journalist who reported on the horror of the atomic bombing to the world in his lengthy piece titled “Hiroshima.” The completed works of art will be displayed from July 17 at a temple in Naka Ward.

The participants in the project are between the ages of 19 and 25 and their work involves painting, imagery, and photographs. On the first day, they visited the Cenotaph for the A-bombed Victims then toured the Peace Memorial Museum. During the museum tour, they stopped to look at a panoramic model of the devastated city center in the aftermath of the atomic bombing and a photo panel which shows the shadow of a human figure that was formed by the heat rays of the bomb. Such sights helped them develop ideas for their works of art. On July 12, they will listen to the account of an A-bomb survivor.

The students first went to Nagasaki on July 8 and moved to Hiroshima on July 11. The exhibition of their art will be held at Myoukei-in Temple in Komachi, Naka Ward, and then in Tokyo and New York after the exhibition in Hiroshima.

This art workshop is the second following the first workshop that was held last year. Mr. Hersey said that works of art shared by young people with the world can help break the chain of hatred created by terrorist attacks and conflicts.