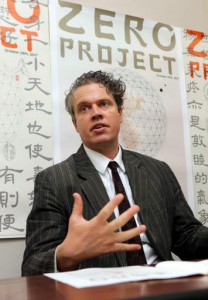 Cannon Hersey, 40, a New York-based artist, and others announced the launch of the “Hiroshima Nagasaki ZERO Project” at a news conference held at Hiroshima City Hall on July 31. Cannon is the grandson of John Hersey, who reported on the horror of the A-bombed city to the world in his lengthy piece “Hiroshima,” which was published in 1946. The project, with support from the Hiroshima International Cultural Foundation, seeks to send out messages of peace and will continue until 2020, the 75th anniversary of the atomic bombing.

Focusing on his coverage of Hiroshima, the journalist John Hersey sought to report on the social consequences of the war. Through this new project, Cannon has aligned himself with his grandfather’s mission. A peace-related event, scheduled for October 29 in Naka Ward, will feature, among others, William Perry, the former secretary of defense during the Clinton administration, and illustrator Seitaro Kuroda, who has been involved in creating works of art on the theme of war and peace.

The event will consist of four meetings where the participants will discuss issues related to the abolition of nuclear weapons, such as the environment and human rights, which involve hurdles to furthering peace in the world. The organizers are calling on younger generations in the A-bombed cities to take active part in these discussions. An art making event with Mr. Kuroda and children, and a concert in the Peace Memorial Park, will also take place and promote a message of peace. Information about the event will be shared with the world via online channels.

Following in his grandfather’s footsteps, Cannon paid his first visit to Hiroshima in 2015, the 70th year since the atomic bombing. “Hiroshima wasn’t just the place of history that I had read about,” he said. “It was a city of hope, a city of resilience.” During his previous visits to Japan, Cannon has held peace and art workshops in Hiroshima and Nagasaki. Last year, he formed a non-profit organization, called “1Future,” in the United States. The “Hiroshima Nagasaki ZERO Project” is a new effort pursued by this organization.

John Hersey John Hersey was a Pulitzer Prize-winning writer and journalist from the United States. He came to Hiroshima in the year after the atomic bombing and conducted detailed interviews with the late Reverend Kiyoshi Tanimoto, two doctors, and three other A-bomb survivors. He wrote an article for The New Yorker magazine, titled “Hiroshima,” that was based on these interviews. This article created worldwide awareness of the horrific consequences of the Hiroshima bombing. He visited Hiroshima again in 1985. He died in 1993 at the age of 78.