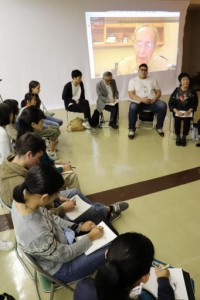 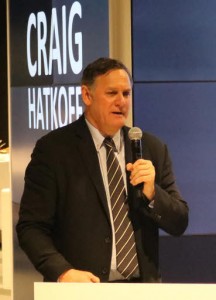 The “Hiroshima Nagasaki ZERO Project” opened in Hiroshima on October 29. This event, organized by the American NPO “1Future,” held discussions with young people on four themes connected to creating a peaceful future. Former U.S. Secretary of Defense William Perry, 90, took part in the discussions via videoconferencing over the Internet. The participants engaged in in-depth conversations about issues involving the human race and nuclear weapons. The event also provided opportunities for the participants to create works of art to express a message of peace.

During a session held at Myokeiin Temple in downtown Hiroshima, the participants took part in a discussion on the theme of human rights. Mr. Perry, appearing on a video screeen from his home in California, said that people should continue to educate themselves about the fact that the world is still threatened by nuclear weapons and convey that information to others.

Mr. Perry served as secretary of defense in the Clinton administration. As an advocate for a world without nuclear weapons, he is one of the figures who helped create the foundation for former President Barack Obama’s speech in Prague, the Czech Republic, where Mr. Obama spoke out for “a world without nuclear weapons.” In spite of Mr. Perry’s advancing age, he remains committed to educating people on nuclear issues. When one of the young participants asked Mr. Perry what they can do to support this cause, he encouraged them to get involved in political activities and call for governments to change their nuclear policies.

Mr. Perry expressed appreciation for the significance of the Treaty on the Prohibition of Nuclear Weapons, now open for the signatures of member states at the United Nations. With Japan opposed to the treaty, like the nuclear weapon states, he said that Japan should instead take the lead in pursuing the abolition of nuclear weapons.

When the United States was on the verge of nuclear war with the former Soviet Union during the Cuban missile crisis in 1962, Mr. Perry was involved in analyzing the Soviet Union’s nuclear capabilities. As Mr. Perry was a central player in designing U.S. nuclear policy, his words show that he keenly recognizes that the danger of nuclear weapons is not a thing of the past.

After exchanging views with Mr. Perry, the participants took part in a discussion with Toshiko Tanaka, 79, a survivor of the Hiroshima A-bombing. The consensus was that we must not give up and that each person should speak out and express their opinions.


Highlights of William Perry’s comments
I made a promise to myself that I will do everything in my power so that my grandchildren and my great-grandchildren will never have to see nuclear weapons being used. The most important thing is education.

Get yourself educated on the fact that the world is still facing nuclear issues. Then educate your friends on nuclear issues. Get together and take political actions and call on your representatives in the Diet to change the policy. You can change the government’s policy by making your voices heard.

The Treaty on the Prohibition of Nuclear Weapons has great significance. I do not believe that the treaty will lead to any dramatic action in the near future, but it is very important that a resolution was adopted for the first time stating that nuclear weapons must not be used.

The American Declaration of Independence stated 240 years ago that “All men are created equal.” But this was not true as they had slaves then. But people strived to make the reality closer to the principle, and the country gradually changed. This is the same for the treaty. Think what you can do as a human being or what your country can do. Japan should be on the side of the nations that take the lead in trying to end nuclear weapons.

Both Japan and the U.S. have been regressing with regard to nuclear disarmament. An increasing number of people do not understand how dangerous nuclear weapons are. My generation invented the nuclear weapon and used it. We are only partially successful in our efforts to control the threat of nuclear weapons. I am focusing my energy on what we can do to make them safe as well as prevent them from being used, but it will be a long and hard struggle before we can eliminate nuclear weapons. It is going to be up to younger generations to really solve this problem.


Hiroshima Nagasaki ZERO Project discusses A-bombed trees and importance of coexistence
In the “Environment” session of discussion at the “Hiroshima Nagasaki ZERO Project,” the participants showed keen interest in A-bombed trees. Tomoko Watanabe, 63, the executive director of ANT-Hiroshima, highlighted the fact that many of the survivor trees are now leaning toward the hypocenter. She said that the trees are conveying a message to human beings and she called on the participants to approach the trees and touch them.

Takahiro Imaru, 16, a second-year high school student who took part in the discussion, lives in Asakita Ward, Hiroshima and is a junior writer for the Chugoku Shimbun. He expressed his determination to learn the story behind each tree and then share these stories with as many people as possible.

In the “Company” session, Gashin Kayo, 45, a priest at Myoukei-in Temple, started off the discussion with a topic that is familiar to most people: how to get along with others we dislike. From this familiar example, the participants learned about the importance of coexistence among different cultures and values.

In the “Society” session, the participants discussed the idea of satoyama, the border zones between mountain foothills and flat land, and satoumi, the places where people lead lives by harvesting the many riches of the sea. The discussion also included how to make use of the resources that exist around us in order to create sustainable communities.