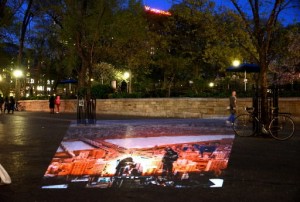 NEW YORK--On May 1, as the NPT Review Conference is being held in New York, Japanese and American students staged an art event in which images symbolizing the wish for peace were projected onto the street in front of the United Nations headquarters and Union Square in the center of the city.

The images were created by superimposing the scenery of present-day Hiroshima with “shadows” created by the students. These shadows represent the people who were killed by the atomic bomb’s heat rays, leaving behind only their shadows. Passersby could be seen stopping to gaze intently at the images, which vividly conveyed the horror of nuclear weapons.

The art event was organized by the Pikadon Project, an organization that promotes a world free of nuclear weapons through art, and the participants included more than 10 American students and students from Nagasaki University. Taku Nishimae, a New York-based filmmaker and a member of the project, said, “I’d like people to think about how they would feel if their beloved family members were killed and turned into shadows. I also want to appeal to people all over the world to learn from history and not repeat the same mistake.”

Cannon Hersey, an artist and the grandson of the late John Hersey who wrote the reportage “Hiroshima,” in 1946, to communicate to the world the tragedy wrought by the Hiroshima A-bombing, visited the venue for the event and said that the people of the world should immediately stop being indifferent to the danger posed by nuclear weapons.