Japanese and American youth express wish for peace through art 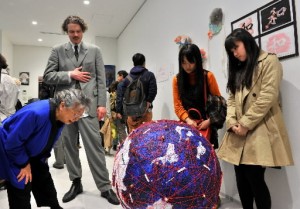 Japanese and American youth took part in a workshop held in Hiroshima and Nagasaki to express the theme of peace through art and completed their works in Hiroshima on April 4. About 30 pieces are on display at Komachi Art Place, in Komachi, Naka Ward, through April 13, including drawings and three-dimensional works, which convey the wish for a world without nuclear weapons and war.

A picture book depicting a nuclear weapon as a ghost; an object in the shape of a nuclear missile, which holds banknotes as a symbol of the ugliness of the human mind; a globe on which red thread, symbolizing blood, common to all humankind, ties together different parts of the world... Twenty-two high school and university students listened to talks by A-bomb survivors, engaged in discussion among themselves, and brought their ideas to life in the form of art.

Ayumi Inagaki, 20, a second-year student at Nagasaki University, said, “Through our discussions, I saw that the ugliness of the human mind is, in a sense, more sinful than nuclear weapons.”

The workshop was organized by antinuclear groups in Japan and the United States. From March 28 to 30, the participants learned the facts of the atomic bombing in Nagasaki, and from March 31, they pursued activities in Hiroshima. Cannon Hersey, 37, an artist and the grandson of the late John Hersey, the American journalist who wrote the well-known reportage titled Hiroshima, led the workshop.