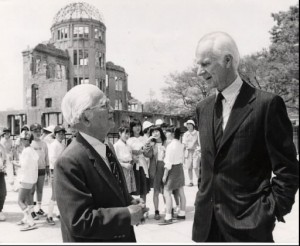 One year after the United States dropped the atomic bomb on Hiroshima, a report on the bombing by an American journalist shocked the world. The late John Hersey’s “Hiroshima” conveyed how the A-bomb attack had devastated the city. The lengthy article was reprinted in a range of newspapers and magazines worldwide and was later published in book form as well. Members of Mr. Hersey’s family, who saw his first handwritten draft of the article, now preserved at Yale University in the U.S. state of Connecticut, felt his grave desire to communicate the consequences of the atomic bombing.

Mr. Hersey was born in Tianjin, China as the son of a missionary and lived there until the age of 10. He reported on war conditions in Europe and the Pacific during World War II. In 1945, he received the Pulitzer Prize for A Bell for Adano, a novel based on the fighting he observed in Italy. Mr. Hersey visited Hiroshima the following year to gather information for his article.

“Hiroshima” described the individual experiences of six A-bomb survivors, including Kiyoshi Tanimoto, a pastor at the Hiroshima Nagarekawa Methodist Church, and Terufumi Sasaki, a doctor at the Hiroshima Red Cross Hospital. Cannon Hersey, 38, the grandson of John Hersey and a New York-based artist, has looked at the first draft and he said that his grandfather probably had to brace himself to publish what he had learned. The New Yorker devoted its entire issue of August 31, 1946 to the article “Hiroshima.” While the magazine was praised by many, including scientist Albert Einstein, who is said to have purchased many copies of the issue to distribute to his friends, it was also harshly criticized by supporters of the atomic bombings.

Kenji Shiga, the director of the Hiroshima Peace Memorial Museum, stressed, “His was one of the few, early voices that conveyed the catastrophic consequences of the atomic bombing to the world, and he wrote from the perspective of human beings. His work is a masterpiece.” Mr. Shiga praised the first draft by saying, “By looking at the handwritten draft, we can see how carefully he chose his words and put them down on paper.”

Mr. Hersey began teaching at Yale University in 1965. He visited Hiroshima again in 1985 and traced the post-war lives of the six people he had interviewed for his original story. It was released as a sequel, titled “The Aftermath.” Mr. Hersey died in 1993 at the age of 78.

Cannon Hersey said that he is proud of his grandfather for his action as an independent human being, not a member of an organization, and for telling the world what had happened to the people of Hiroshima. Cannon produced a documentary film that traced the life of his grandfather, in which Cannon also appears. The film will be broadcast in two parts on NHK’s BS1 channel, airing from midnight on August 4 and 5.