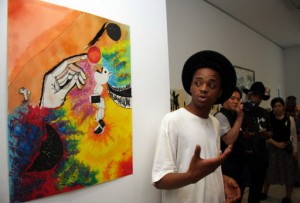 On July 17, an exhibition of art work by 11 young people from Japan, the United States, and South Africa, made during stays in Hiroshima and Nagasaki, opened at Komachi Art Place, an art gallery located in Komachi, Naka Ward. The exhibition is part of a workshop to express wishes for a peaceful world through art. Their works will be exhibited at the gallery until July 24.

About 20 pieces are on display, including a painting which depicts a nuclear weapon as a “black sun”; a block printing made up of a collage of photos of artifacts exhibited in the Peace Memorial Museum in Naka Ward; and a T-shirt painted with a picture of people hugging each another. The 11 participants, who range in age from 19 to 25, introduced their works to the visitors at the exhibition.

This project has been organized by Cannon Hersey, 39, an artist based in the United States, and others. Mr. Hersey is the grandson of the late John Hersey, the American journalist who conveyed the devastation of the Hiroshima bombing to people around the world through his reportage titled “Hiroshima.” The participants in the project began their work in Nagasaki on July 8, then moved to Hiroshima on July 11. They toured the museum and listened to the account of an A-bomb survivor so they could develop ideas for their art pieces.

Hirono Shiranami, 19, a second-year student from Nagasaki University and a resident of Nagasaki, used paper clay and other materials to depict children playing on the street right before the atomic bomb was dropped. Ms. Shiranami said, “After I heard the A-bomb survivor’s story, I felt determined to convey the horror of the atomic bombing, which stole away people’s lives in an instant.”