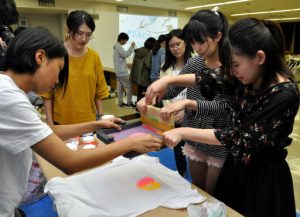 The Hiroshima Nagasaki ZERO Project kicked off in Naka Ward, Hiroshima on October 6. With support from the Hiroshima International Cultural Foundation, the project focuses on the use of art to convey a message of peace.

This project is now marking its second year in the A-bombed city. On the first day, a workshop titled “Peace Piece in Hiroshima” took place at Myoukeiin Temple with about 30 people present. First, the participants watched a video of the account of Koko Kondo, 73, the eldest daughter of the late Kiyoshi Tanimoto, a pastor who communicated the devastating conditions wrought by the bomb in Hiroshima to people in the United States. They then engaged in discussion about the war and the atomic bombing.

After the workshop, young people, including six junior writers of the Chugoku Shimbun, made T-shirts to convey a message of peace, guided by teachers from the Anabuki Design College in Minami Ward. The young people printed the original designs they created, with such images as a heart or a peace sign, and displayed the finished shirts at a neighboring gallery. Mina Matsubara, 20, a second-year student at Yasuda Women’s University, said, “I hope art activities like this can bring us together and enable us to become more interested in the issue of nuclear abolition.”

Also, an exhibition of works by three artists from Japan and the United States, including Cannon Hersey, 41, opened at the former Hiroshima Branch building of the Bank of Japan. Mr. Hersey devised the idea of the Hiroshima Nagasaki ZERO Project, following in the footsteps of his grandfather, John Hersey, who wrote a well-known book, titled Hiroshima, to report on the destruction of the city in the wake of the atomic bombing. The younger Hersey has created a video that features A-bombed trees. The exhibition will run until October 14.