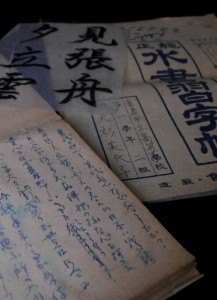 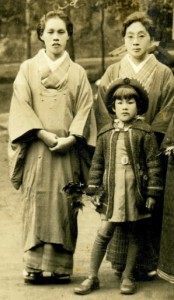 Brother asks that notebook be preserved
Scolded for inappropriate language; “please forgive me”

Miyoko Osugi was 13 years old and a first-year student at Hiroshima Municipal Girls’ High School (now Funairi High School) when she was killed in the atomic bombing of Hiroshima on August 6, 1945. Her remains were never found. After her daughter’s death, Miyoko’s mother Tomiko, who died in 1971 at the age of 67, recorded her laments in a notebook Miyoko had used at school. Miyoko’s brother, who had helped look for his sister after the A-bombing, asked his family to preserve the notebook.

On the day of the A-bombing, 541 first- and second-year students at the Municipal Girls’ High School were killed while working on the demolition of buildings to make fire breaks. Their worksite was on the south side of what is now Peace Memorial Park in Naka Ward.

“Miyoko! Miyoko! Why did you die? I want to hold you in my arms once again.” This wish of Tomiko, which could never be fulfilled, was among notes she began making in the notebook on August 7, 1946, after attending a memorial service marking one year since the deaths of the students. The service was conducted by the school at the site where the girls had been working.

Tomiko was reminded of Miyoko when she saw classmates who had escaped death in the A-bombing because they had stayed home sick that day. “When I think of how you enjoyed talking with your friends, I can’t help but cry,” she wrote.

Tomiko continued to write in the notebook, which her daughter had used in geography class, off and on. After the memorial service marking the second anniversary of Miyoko’s death on August 30, 1947, Tomiko reproached herself: “Four or five days before you died, I scolded you harshly for using inappropriate language. Miyoko, you had such a short life of only 14 years. Please forgive me.”

After the death in 2011 at 84 of Teruaki Osugi, Miyoko’s older brother, the notebook came into the possession of his widow, Nobuko, 80. Before he died, Teruaki told Nobuko that, for the sake of peace, the notebook must not be thrown away. Nobuko also has a journal Miyoko kept while a student at Minami National School (now Minami Elementary School in Minami Ward) and calligraphy she did while at the Municipal Girls’ High School.

“They talked about Miyoko to the end,” said Nobuko, recalling her mother-in-law and her husband. Since their deaths she takes the notebook out every year on the anniversary of the atomic bombing and says a prayer in the family’s Buddhist altar room.

“That terrible air raid: Why did they do such a terrible thing to innocent children with hearts like a Buddha?” Tomiko wrote. Nobuko flipped through the pages of the notebook. It tells of the horror of the atomic bombing, which took the lives of teenage girls. “I will tell my children to take good care of this notebook,” she said.