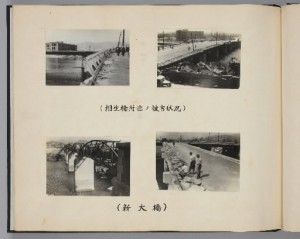 Materials held by the Imperial Household Archives indicate that Emperor Showa (Hirohito) obtained concrete information of the devastation wrought by the atomic bombing of Hiroshima. The presence of The Collection of Photographs of the War Damage in Hiroshima from August 6, 1945 has been confirmed for the first time in 70 years. This article explores this valuable information on the A-bombed city.

On September 1, 1945, one day before the signing of the surrender document, chamberlain Torahiko Nagazumi was dispatched to Hiroshima and arrived in the ruined city on September 3. (Mr. Nagazumi died in 1994.) It is safe to say that the collection of photos compiled by the Imperial Japanese Army’s Shipping Command was brought back to Tokyo by Mr. Nagamizu.

The Shipping Command was located in today’s Ujina Kaigan in Minami Ward. Right after the bombing on August 6, all its units launched into rescue operations and carried the injured to Ninoshima Island. Masami Onuka, who was a member of the Shipping Command’s photography team, began taking photos on August 7. He said that he hesitated to record these ghastly sights in photographs, even though he was ordered to do so. (Mr. Onuka died in 2011.)

Photos of a man and a woman suffering from burns that covered their bodies, taken by Mr. Onuka, were printed in the August 6, 1952 edition of the Asahi Graph. These photos appeared in the opening of a special feature dubbed “the first publication of the A-bomb damage.” Published after the occupation by the General Headquarters of the Allied Forces (GHQ) came to an end, the special edition created a sensation. These photos are also displayed in the Hiroshima Peace Memorial Museum.

The photo collection shown to Emperor Showa was the first collection of photos which depict the horror suffered by human beings in an atomic attack. The collection also includes photos taken by Yotsugi Kawahara, another member of the photography team. He took photos around the city on August 9. (Mr. Yotsugi died in 1972.) Among the 45 photos of the collection are six photos that had not been known to exist, including an image of the Shin-Ohashi Bridge (today’s West Peace Bridge in Naka Ward).

Satoru Ubuki, a former professor at Hiroshima Jogakuin University, pursues research on the history of the atomic bombing. Based on these records, he believes that Emperor Showa was provided sound information about the damage caused by the Hiroshima bombing, information that was not available to the general public, and that the emperor gave the bombings significant attention.

An entry in a biography of Emperor Showa supports Mr. Ubuki’s belief. According to the biography, on the evening of September 23, 1945, the emperor and the empress saw a newsreel of the harm inflicted by the atomic bomb in Hiroshima.

The film was shot by the crew of Nippon Eigasha (Japan Motion-Picture Company), which followed Mr. Nagazumi while he inspected the damage in Hiroshima. Explanation was added to the film, stating that the horror of the atomic bombs includes people dying from radiation exposure. On September 19, the GHQ issued a press code to restrict media coverage of the atomic bombings.

It has also been learned that, along with the photo collection, a set of reports issued by the prefectural and municipal governments of Hiroshima and other entities still exist.

One of the documents explained the large number of victims among the students who had been mobilized for the war effort and were performing various kinds of work at the time of the bombing: “The number of missing is 5,474, most of whom are presumed dead.” Another described what was happening to children placed in a facility for those orphaned by the attack: “Children have diarrhea possibly due to the poisonous gas (from the bomb).” These documents reveal a reality that none had ever experienced before.

The photos and documents presented to Emperor Showa are important materials that provide a true picture of Hiroshima in the aftermath of the atomic bombing.