Hiroshima: 70 Years After the A-bombing: Hardships suffered by mother and son during city’s recovery; photographed harvesting wheat in front of city hall in 1948 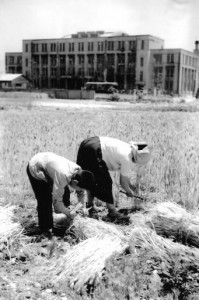 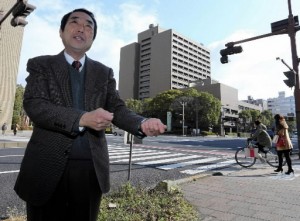 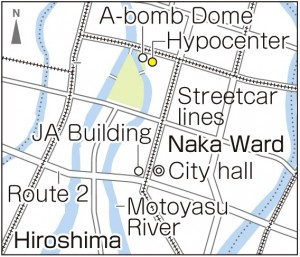 The identities of a mother and son in a photo taken in Hiroshima in 1948, three years after the atomic bombing, have been learned. In the photo, the pair are seen harvesting wheat in front of Hiroshima City Hall. The picture appeared in a city publication titled “Hiroshima Shinshi” in 1983 to illustrate the hardships that citizens endured while the city’s recovery was impeded by food shortages. The photo was also used in publications issued on the 40th and 50th anniversaries of the atomic bombings. The mother and son have been identified as Takashi Suzuki, 72, a resident of Kumano-cho in Hiroshima Prefecture, and his mother Takiyo, who died in 2000 at the age of 83.

The wheat field in front of city hall extended from the current site of the prefectural JA Building in Ote-machi, Naka Ward, south to Route 2.

The photo first appeared in the May 29, 1948 issue of “Evening Edition Hiroshima,” a newspaper published by a separate company set up by the Chugoku Shimbun. A headline over the picture said, “Peacefully harvesting wheat amid the ruins of Hiroshima.”

In Hiroshima there were ongoing delays in the delivery of rations of rice, wheat and other staples. During the summer of the previous year, the delays averaged 20 days’ worth of rations, and local residents thronged the prefectural offices. The article stated that the wheat had been grown to provide against continued food shortages. “The hard work of the mother and son in an effort to make it through the summer was rewarded with an excellent crop of wheat,” the article noted.

At the time of the atomic bombing Mr. Suzuki was at the family home in Funairi Naka-machi, about 1.2 km from the hypocenter. His mother was out. After the A-bombing they lived in a bomb shelter on the west side of city hall until Mr. Suzuki’s father was discharged from the military and sent home. Then the family put up a shack near the bomb shelter and cultivated the fields.

In December 1949, the city ordered the family to vacate the property in Ote-machi by the end of January of the following year because the site was in an area that had been targeted for redevelopment as part of the city’s reconstruction effort. The family then moved about 400 meters west to the bank of the Motoyasu River. They ultimately moved within the city a total of four times.

The photograph of the mother and son in the wheat field in front of city hall was republished in the November 1, 1983 edition of “Hiroshima Shinshi,” a publication issued by the city from 1975 to 1985 that examined Hiroshima’s postwar history. Takiyo Suzuki discovered the photograph in the volume titled “Citizens and the City Government.” She wrote “A place of painful memories” in the publication and saved it.

Mr. Suzuki began delivering newspapers when he was in the fifth grade at Senda Elementary School. The money he earned helped with expenses for his family, which now included three younger siblings. He attended night school at the Hiroshima Prefectural Technical High School while working at a store selling dyestuffs. Upon graduation he went to work for what is now Mazda. He has two sons and a daughter and 10 grandchildren.

“We also grew squash and sweet potatoes. I clearly remember that we ate the vines too. I was lucky to have survived, so I want to be of service in some way,” Mr. Suzuki said, explaining why he came forward. He kept the notice his family received ordering them to clear off the property and plans to donate it to the Hiroshima Municipal Archives.

Mr. Suzuki will be interviewed in conjunction with a record of the city’s 70 years of postwar history that is being compiled by the archives. “In addition to the scene depicted in the photograph, we would like to chronicle how people lived during the recovery period by looking back at the lives of this mother and son,” a staff member said.