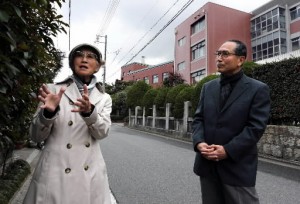 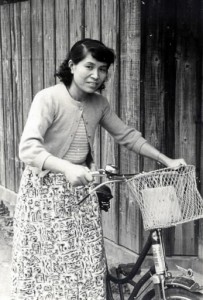 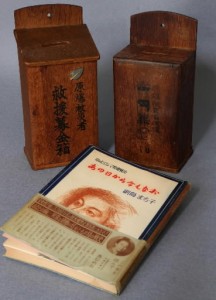 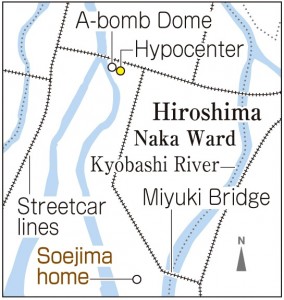 Account of experiences published in 1956; lusty first cry of newborn amid the ruins
Writer Hisashi Inoue, who penned a play about the atomic bombing of Hiroshima, hailed Machi Soejima’s account of the atomic bombing, “Ano hi kara ima mo nao” [From That Day and Still Now], as “first-rate” and said it recorded the actual conditions “calmly and accurately.”

At the time of the atomic bombing on August 6, 1945, Ms. Soejima, 32, whose pen name was Machiko, was at the family home in Minami Senda-machi (now Minami Senda-machi Nishi in Naka Ward). She had three boys and a girl and was pregnant with her fifth child. Her husband, Yoshio, 38, a professor at the Hiroshima Technical Institute (now Hiroshima University), had been drafted.

“The collapsed second floor served as our roof,” said Ms. Soejima’s daughter Takako Chiba, 73, a resident of Ashiya, Hyogo Prefecture. “One morning I woke up in that room to find that my mother had given birth to my little brother.” As if tracing the account their mother had written, Kuniyoshi Soejima, 69, also a resident of Ashiya, and his sister recently visited the site where their family had been at the time of the A-bombing. It is about 2.5 km from the hypocenter on the road that runs along the north side of the former main gate to Shudo Junior and Senior High School.

Machi readied warm water and cut the baby’s umbilical herself. “Beyond dying or living, I merely kept praying to be able to carry out that important task with no problems,” she wrote. She recorded the date and time – August 19, 1945, 1:20 a.m. – and added, “The baby’s lusty cry arose amid the ruins of Hiroshima, which was like a city of death.”

In her account she also described fleeing toward the Kyobashi River with her children while in labor, the tragedy that befell the family of a shopkeeper who had been kind to her and the theft of furniture and dishes she had dug out of the family’s partially destroyed home.

The Soejima family moved to Ashiya in 1948 after Yoshio was discharged from the military and took a job at what is now Kobe University. Concerned about her health and the Korean War, which began two years later, Machi wrote an account of her atomic bombing experiences, referring to it as a “testament.” She also joined a local women’s group called the Ashiya Asunaro Tomo no Kai.

In 1954 crewmembers of a Japanese fishing boat were contaminated with radioactive fallout following a hydrogen bomb test conducted by the U.S. military on Bikini Atoll in the Pacific Ocean. The women’s group took part in a subsequent petition drive seeking a ban on atomic and hydrogen bombs, and Machi’s record of the A-bombing was circulated among the group’s members.

In 1955 Machi attended the first World Conference against Atomic and Hydrogen Bombs, which was held in Hiroshima, as a representative of the Tomo no Kai.

“I had thought that 10 years’ time must have washed away all of the agony and scars of the past, when suddenly something appeared vividly before me: It was the suffering of the A-bomb survivors,” Machi wrote. Soon after returning to Ashiya from Hiroshima she began soliciting donations locally to aid the survivors and visited atomic bomb survivors, who had been pushed to the margins of society.

Machi put a collection box in a grocery store she shopped at, and she had her children teach her how to ride a bicycle so she could travel around and collect the donations that had been made. The entire family worked to wrap up every 50 yen in paper and used it for relief or monetary gifts for survivors.

“Ano hi kara ima mo nao” was published by Tokyo-based Toto Shobo on November 25, 1956. That was also the day that an atomic bomb survivors’ association (now the Hyogo Confederation of A- and H-Bomb Sufferers Organizations (Hyogo Hidankyo)) was formed in Hyogo Prefecture. Machi served as its first president.

Machi also worked with the prefectural government to open a consultation center for A-bomb survivors. She continued to serve as an advisor there until 1986, when she suffered a stroke. She participated in the Hiroshima-Nagasaki World Peace Pilgrimage in 1964, and in 1982, under the auspices of the Japan Confederation of A- and H-Bomb Sufferers Organizations (Nihon Hidankyo), she traveled to Europe with a group of A-bomb survivors to recount their experiences.

After Machi died in 2006 at the age of 93, Takako, a former elementary school teacher, carried on her mother’s efforts, serving as a board member of the Hyogo Hidankyo. Last year, Kuniyoshi, who formerly worked for a political party, served as the organization’s deputy secretary general.

“I was still in my mother’s womb, so I have no recollection of the A-bombing,” Kuniyoshi said. “But I think I can listen sympathetically to the concerns of the aging A-bomb survivors who knew my mother.” He also publishes records of the proceedings of class action lawsuits over A-bomb disease certification in a magazine with limited circulation.

Takako explained her actions by saying, “I have three sons, and I have a responsibility to ensure that my grandchildren can live peaceful lives as well,” she said. She also referred to the accident at the Fukushima No. 1 (Daiichi) nuclear power plant, noting that the threat of harm from radiation still exists.