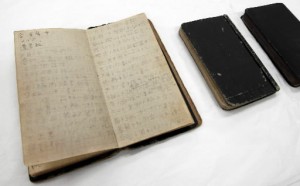 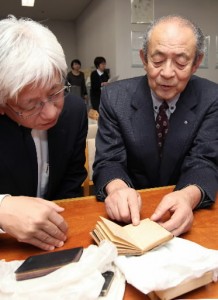 Along with handwritten materials by two other writers who survived the bombing, the Association of Preservation Data on Hiroshima Literature hopes to have this notebook added to the Memory of the World Register by the United Nations Educational, Scientific and Cultural Organization (UNESCO). For inclusion, factors such as the availability of the material to the public and its means of preservation are taken into account. For this reason, Mr. Hara’s family is determined to lend its support to the association’s efforts with its contribution.

Tokihiko Hara, 80, Mr. Hara’s nephew, who had kept the notebook at his home, along with two other notebooks used by the author, visited the museum and handed them to Kenji Shiga, the director of the museum. The nephew, who had carried the notebook with him while serving as a guide to A-bombed sites in the city, said, “I hope this notebook casts doubt on the atomic age and conveys the cruelty of the atomic bombing to people all over the world.”

Mr. Hara was a well-known writer prior to World War II. He survived the atomic bombing while at his parents’ home in Noborimachi (in today’s Naka Ward). The next day, after fleeing to Hiroshima Toshogu Shrine in Higashi Ward, he opened his notebook and began writing: “Around 8:30 a.m. on August 6, there was a sudden air strike which decimated the entire city in an instant.” He put down in detail, in pencil, all that he had witnessed during his escape.

Later, he noted, “It would be Heaven’s will for me to live on and convey this catastrophe to others,” indicating the sense of mission he felt as a man of letters.

Mr. Shiga mentioned that he will consider holding a special exhibition at the museum to show the notebook to the public. “I feel I should now take over Mr. Hara’s mission,” he said.