Hiroshima: 70 Years After the A-bombing: Letters sent by parents between Tokyo and Hiroshima, emotional account of son’s fight for life after A-bombing 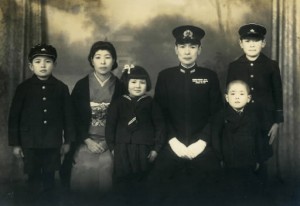 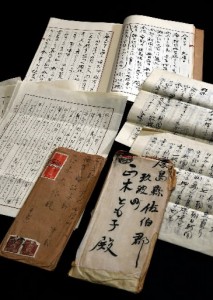 “Write to father to come home because I want to see him once more before I die”; “I would donate half of my blood or, if that were not enough, all of it”

Letters between parents who lost their son to the atomic bombing have recently been made public along with journals and other materials from that period. The 18 letters sent by Ikutora Masaki, 42, and his wife Tomoko, 35, just after the atomic bombing offer an emotional account of their eldest son’s return home after the A-bombing and his subsequent death. Yoshitora Masaki was a 13-year-old first-year student at First Hiroshima Prefectural Junior High School (now Kokutaiji High School). The materials were made public by the couple’s second son, Takatora, a resident of Tokyo.

At the time, Mr. Masaki was a Navy captain assigned to the Technical Center of the Navy Ministry, its nerve center. Tomoko had taken three of her children to her father-in-law’s hometown of Kuba-cho (now part of the city of Otake) to avoid air raids. Yoshitora stayed with relatives in the city of Hiroshima and went to junior high school from their home.

The letters from Tomoko start with one dated August 7, 1945, the day after the atomic bombing. In that first letter she said, “Hiroshima burned throughout the night last night. I couldn’t sleep at all wondering how Yoshitora was doing amid the flames.”

Yoshitora was in a school building about 800 meters from the hypocenter at the time of the atomic bombing. He managed to reach Kuba-cho on the night of August 7. On August 8 his mother wrote to her husband of their son’s return saying, “I had him sleep beside me and stroked his head many times during the night.” But her letters became a daily record of his decline. On August 21 she wrote, “His hair is falling out. There are no roots, and when I touch his head hair falls out.”

On August 12 Ikutora heard a report made to the Technical Department by a Navy survey team that had just returned to Tokyo from Hiroshima. That same day he wrote of his heartbreak. “While hoping for [Yoshitora’s safety], I was ashamed of my self-serving, cowardly thoughts and said nothing of my feelings.”

In a letter dated August 22 Tomoko wrote, “Yoshitora asked me to write you to come home because he wants to see you once more before he dies.” But Mr. Masaki had been ordered to prepare for the arrival of the Allied Occupation Forces following Japan’s defeat and was unable to travel.

“I would donate half of my blood or, if that were not enough, all of it just to see the color return to Yoshitora’s cheeks,” Ikutora said in a letter dated August 29. His son died that same day.

Nine years later Mr. Masaki wrote notes about those days. He also formed an organization for the families of the 353 students from First Hiroshima Prefectural Junior High School who died in the A-bombing. “The Stars Are Watching,” a publication launched in 1954 and still issued, describes the group’s activities.

Takatora, 79, who was at his brother’s bedside when he died, explained why he decided to make the letters public: “Those of my parents’ generation who know of the tragedy of the atomic bombing are nearly all gone,” he said. “I would like people to know of the depth of the grief my father expressed in his writings.” Takatora also has a journal his father kept and memos he made on the survey team’s report. Referring to the “new-type” bomb dropped on Hiroshima, the journal entry for the night of August 7 says, “It was an atomic bomb and has thus caused enormous, unimaginable destruction.”