The Key to a World without Nuclear Weapons: One year after Obama’s visit to Hiroshima, Part 3 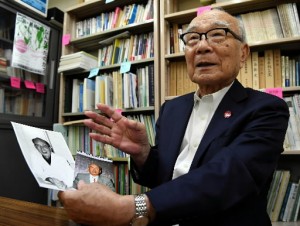 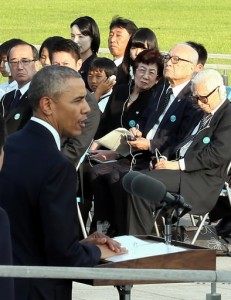 Terumi Tanaka, 85, works almost every day at the office of the Japan Confederation of A- and H-Bomb Sufferers Organizations (Nihon Hidankyo) in Tokyo. On a recent day, he checked email messages that reported on the progress of talks at the United Nations for a treaty that would outlaw nuclear weapons and discussed strategies for a signature drive to call for the realization of this treaty. Mr. Tanaka, a resident of Niiza, Saitama Prefecture, is the secretary general of the organization. He said this is a crucial time for their campaign and he must keep working hard.

Mr. Tanaka experienced the Nagasaki A-bombing while at home at the age of 13. He was not seriously injured, but five relatives, including his grandfather and aunt, were killed in the attack. He forged on and studied science at his university, as he wanted to learn more about the atomic bomb. After graduating, he became engaged in research and education in the School of Engineering at Tohoku University. He also began playing an active part in the survivors’ movement in the 1970s.

Mr. Tanaka has visited the United States many times to share his experience of the bombing and to attend international conferences. In the nuclear superpower, he has met with people’s strong “faith in nuclear weapons” and apathy toward what happened in Hiroshima. On May 27, 2016, he was invited to be one of the representatives of A-bomb survivors who attended the speech given by then U.S. President Barack Obama in the Hiroshima Peace Memorial Park.

He said he was unhappy when he heard Mr. Obama begin his speech by saying that “Death fell from the sky,” without stating the fact that the United States dropped the bomb. But, on the whole, he was impressed with the speech because Mr. Obama sounded an alarm by saying “Technological progress...can doom us” and he urged a “moral awakening.” Mr. Tanaka said, “I’ve always had the same ideas as Mr. Obama. I felt that he came to Hiroshima to convey those ideas.” Mr. Tanaka then entertained the hope that the United States would alter its nuclear policies.

But he was unable to hear the United States proclaim that it would adopt a “no-first-use” declaration, though the Obama administration was reportedly considering this in the wake of his visit to Hiroshima. It did not ratify the Comprehensive Nuclear-Test-Ban Treaty, either. And after Donald Trump replaced Mr. Obama, the new president has been making provocative comments about nuclear weapons.

Mr. Tanaka has been serving as the secretary general of Nihon Hidankyo for 17 years, during which many of his colleagues have passed away. In March of this year, Shuntaro Hida, who served as an advisor to the organization, died at the age of 100. Mr. Hida, who was a doctor, was exposed to the atomic bombing in Hiroshima yet made efforts to treat the survivors. In 1976, Mr. Tanaka and Mr. Hida traveled to U.N. headquarters to call for a ban on nuclear weapons. Since that time they remained on good terms with one another, and Mr. Tanaka had great respect for Mr. Hida.

Mr. Tanaka believes that it’s now time for a generational change in the organization. He is working to bring in younger members and has asked Toshiki Fujimori, 73, the assistant secretary general of Nihon Hidankyo, to represent the organization on trips abroad. “The will of the public can change a government’s nuclear policies, whether it’s possessing nuclear weapons in the United States or Japan’s policy of using the nuclear umbrella,” Mr. Tanaka said. He added that A-bomb survivors must not give up, that they must continue conveying the reality of the damage caused by the atomic bombs and help stir people’s moral awakening. He hopes that the younger members will sustain the faith that has deepened as a result of Mr. Obama’s visit to Hiroshima.

However, 72 years have passed since the atomic bombings and the average age of the survivors is over 80. Even “younger survivors” do not have much time left to directly hand down their experiences to younger generations.

Hiroshi Harada, 77, a former director of the Hiroshima Peace Memorial Museum, still wishes that Mr. Obama had had the opportunity to listen to a survivor’s experience when he visited Hiroshima. Mr. Harada, who continues to share his account of the Hiroshima bombing, said that the remains of the devastated city could have been shown to Mr. Obama. “The visit alone should not satisfy us,” he said. “It is now time to again raise the question of how we can call upon political leaders, as well as the general public, to take action.”

The messages made by survivors have helped propel some non-nuclear nations to pursue a treaty at the United Nations that would outlaw nuclear arms. The preamble for the proposed treaty includes the word “hibakusha” and refers to their sufferings and efforts. The second round of negotiations for this treaty will open in June. The survivors are filled with a sense of duty, as well as frustration, over whether they can “awaken” the nuclear nations and Japan, countries that cling to nuclear deterrence for their security.

Speech by President Barack Obama at Hiroshima Peace Memorial Park
Barack Obama delivered a speech that lasted 17 minutes in front of the Cenotaph for the A-bomb Victims, urging the nuclear powers to have the courage to pursue a world without nuclear weapons. He began his speech by saying, “Seventy-one years ago, on a bright, cloudless morning, death fell from the sky and the world was changed.” He then referred to the victims including many ordinary Japanese people and those from the Korean Peninsula. At the end of his speech, he said, “That is the future we can choose -- a future in which Hiroshima and Nagasaki are known not as the dawn of atomic warfare, but as the start of our own moral awakening.” He did not make an apology to the victims and survivors for the atomic bombings.