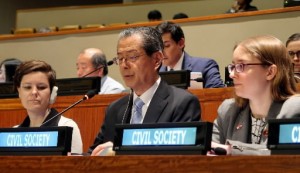 NEW YORK -- Yasuyoshi Komizo, the secretary-general of Mayors for Peace (for which Hiroshima Mayor Kazumi Matsui serves as president), delivered a speech at United Nations headquarters in New York on March 29, the third day of the negotiations to establish a treaty to ban nuclear weapons. Speaking as a representative of one of the NGOs involved in the conference, Mr. Komizo said that the treaty must be a viable mechanism for the elimination of nuclear arms and that it should involve the nuclear powers and the nations under the nuclear umbrella.

Mr. Komizo said that Mayors for Peace supports a nuclear ban treaty, which would prohibit the possession, use, development, and all other actions related to nuclear weapons. This agreement is advocated by many of the participating nations and NGOs. He also proposed creating a system in which discussions can continue after the treaty is concluded and involve non-signatories. Such a system is necessary, he said, to urge other nations, including the nuclear powers, to participate.

Frank Cownie, the mayor of Des Moines, Iowa, is also attending the conference. The city of Des Moines serves as a leader city in the United States for Mayors for Peace.

The main topic for the day’s discussion involved the prohibitions that will be included in the treaty. Many representatives of national governments expressed support for the idea of outlawing the possession, use, and development of nuclear weapons. About the use of such weapons, in particular, the representatives of Sri Lanka and other countries demanded that the treaty stipulate that nuclear weapons must not be used under any circumstances, based on the humanitarian consequences these weapons can produce.