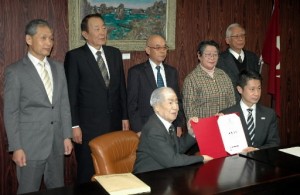 On February 20, the leaders of A-bomb survivors’ organizations in Hiroshima Prefecture visited Hiroshima Governor Hidehiko Yuzaki at the Hiroshima Prefectural Office to ask that he sign a petition called the “Hibakusha Appeal for a Nuclear Ban Treaty.” These groups are engaged in a signature drive to urge the nations of the world to establish a treaty to outlaw and eliminate all nuclear weapons from the earth. Mr. Yuzaki signed the petition and said, “I hope that the power of the world’s people will help advance a prohibition on nuclear weapons.”

Five leaders of the organizations, including Sunao Tsuboi, 91, the chair of the Hiroshima Prefectural Confederation of A-bomb Sufferers Organizations, and Kunihiko Sakuma, 72, the chair of the other Hiroshima Prefectural Confederation of A-bomb Sufferers Organizations, visited Governor Yuzaki. Mr. Tsuboi stressed, “We have come to ask the governor to help eliminate nuclear weapons, an enemy of the whole human race.” Mr. Sakuma said, “We are determined to continue our efforts to realize a world without nuclear weapons.”

The Hibakusha Appeal for a Nuclear Ban Treaty was proposed by Nihon Hidankyo (the Japan Confederation of A- and H-bomb Sufferers Organizations) and was launched in April of last year. Seven A-bomb survivors’ organizations located in Hiroshima Prefecture have been working together to gather signatures. With the aim of having this treaty concluded by August 2020, the groups will submit the petition at the General Assembly of the United Nations each fall. A total of 560,000 signatures were collected in Japan as of September 30, 2016. Negotiations to discuss a treaty to outlaw nuclear arms will begin at U.N. headquarters in New York on March 27.