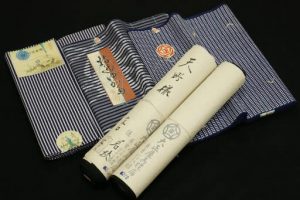 On August 3, it was learned that two rolls of kimono fabric and three yukata (informal light cotton kimono for summer) purchased at the Taishoya Kimono Shop have been kept in storage by a physician in Hiroshima’s Nishi Ward. The Taishoya Kimono Shop was once housed in the building now known as the Rest House, an A-bombed building located in Hiroshima Peace Memorial Park, in the city’s Naka Ward. According to the Hiroshima Peace Memorial Museum, this was the first time fabric rolls sold by the shop have been identified.

Tomonao Amano, 94, has kept the fabric rolls and yukata in storage at his home. The dyed black fabric rolls are for use in making men’s kimono. They are wrapped in thick Japanese paper on which “Taishoya Kimono Shop” is printed. The family name of the late Kinjiro Wakasa, a shop manager at that time, is written on the paper with a brush. The three yukata, one for women and two for men, are unused and include price tags. One of the price tags has a date marked August 1938, implying it was a product placed under price controls utilized at that time.

Founded in 1912, the Taishoya Kimono Shop constructed a new retail building in 1929. However, the shop was forced to close due to the Textile Control Ordinance during the Pacific War, and the building was later used as the Fuel Hall. The reinforced concrete structure, standing 170 meters from the hypocenter, survived the atomic bombing. Shinobu Kikuraku of the museum’s Curatorial Division said, “Few products remain because most were incinerated in fires from the atomic bombing.” She added, “We’ve never before seen a roll of fabric sold by the shop at that time. These fabrics are well preserved and would serve as valuable materials that speak to the popularity of the shop.”