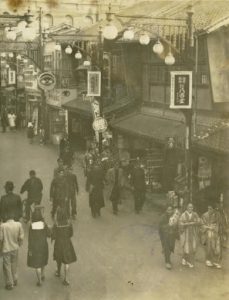 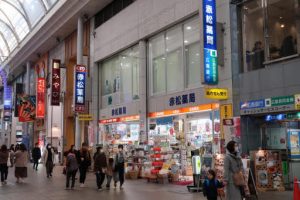 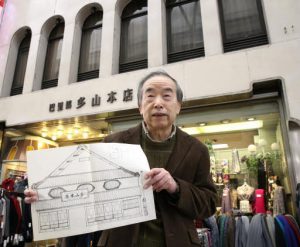 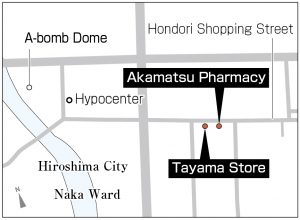 
One discovered photograph brought memories back to the present
In November 2019, when the Chugoku Shimbun interviewed Kaiso Akamatsu, 92, chairperson of Akamatsu Pharmacy, located on Hondori shopping street in Hiroshima’s Naka Ward, he said, “There are no photos of the pharmacy before the atomic bombing because all of them were incinerated.”

Akamatsu Pharmacy is an old drugstore established about 400 years ago. In July 1945, Mr. Akamatsu started his studies at a pharmaceutical college in Gifu Prefecture to become a pharmacist. The next month, the atomic bomb dropped by the United States exploded in the sky above his hometown.

The pharmacy was located roughly 480 meters from the hypocenter. He entered the city area of Hiroshima around August 9. Mr. Akamatsu’s faint hopes turned to sorrow when he encountered the pharmacy in ruins. He found the bones of his father, Kanichi, then 57, next to his wristwatch, a familiar sight for him. He recognized the remains in the area around the drawing room to be those of his mother, Yukue, 52, from the glasses lying nearby.

After World War II, Mr. Akamatsu rebuilt the pharmacy with his older brother, who had returned to Japan after completing his military service, and worked to once again make it a Hondori symbol. However, there were no photos of his parents’ beloved pharmacy taken before the atomic bombing. Unable to forget his expression of disappointment, we continued to collect information, ultimately discovering—in the Hiroshima University Archives in the city of Higashihiroshima—a photo taken around 1942 that showed the sign “Medicine, Akamatsu Pharmacy” and the store front.

“Oh my, that’s our pharmacy,” Mr. Akamatsu exclaimed, when we showed him a copy of the photo. “Yaokin, a dry goods grocery, sold lots of beans,” he said, seeming to recall memories from long ago. “Raito Optical did well because soldiers bought spare glasses before being sent off to the front.”

Tomoe Tayama, 77, who manages Harima Tayama, a retail shop that sells women’s dress fabrics at a location five buildings from Akamatsu Pharmacy, continues to search for any photo taken before the store was incinerated in the atomic bombing.

Mr. Tayama showed me a drawing inside his store. It was done in pencil and depicted a dwelling combined with a retail store, as well as a sign on which was written “Tayama Store, Ltd.” Twenty-five years ago, an employee during the war created the drawing after Mr. Tayama had asked his relatives about the shop in the past. “It was a large store,” he said. And his desire to know more about the store’s previous iteration grew.

Starting before the war, the Tayama Store was a western fabric wholesaler. It closed around 1942 and was subsequently rented out as a dormitory for use by the West Police Station. His aunt and several police officers living there were killed in the atomic bombing. Mr. Tayama, then three years of age, had been evacuated to the city of Hatsukaichi, considered to be a safer location, and thus has no recollection of events.

Expecting to expand the circle of community

After the war, Mr. Tayama’s father, Yukio, who died in 1985 at age 77, reopened the store. The name of the store was based on the former town name Harimaya-cho. Mr. Tayama wondered what it would be like to lose in the same way a beloved store and family. He wondered how people felt when they reconstructed the war-torn city. He wants to know his family history. He believes such photos can provide useful clues for him in this regard.

In Hiroshima—whose downtown area was completely destroyed in the atomic bombing—government institutions and news media were also gravely damaged. The number of existing photos taken before the atomic bombing is limited. However, if the circle of people who try to look back on memories of lost communities continues to widen, voids in the historical record can be filled one after the other.