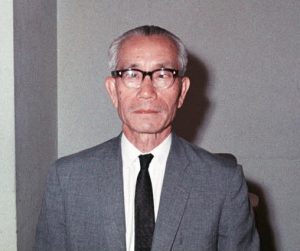 
Statement made in 1979 advisory meeting with Health Minister asked government to pay condolence money after claim rights waived
During the period 1979–1980, a private advisory committee to Japan’s then Minister of Health and Welfare was established to discuss the fundamental principles of the national government’s measures for relief provided to A-bomb victims. On May 17 it was learned that a former Foreign Ministry treaty bureau chief, in charge of negotiations for the San Francisco Peace Treaty, said during advisory committee discussions that “Destruction of human lives through the atomic bombings is in violation of international law, and the United States should assume liability for compensation.” He urged the Japanese government, which waived claim rights against the United States when it signed the peace treaty, to take relief measures for the victims and their bereaved families. His opinion, however, was ultimately not reflected in the advisory committee’s written opinions.

Kumao Nishimura served as the Japan Foreign Ministry’s treaty division bureau chief between 1947 and 1952, retiring in 1957. When Ryutaro Hashimoto was the Health Minister, Mr. Nishimura was one of seven members of the Conference for Fundamental Problems of Measures for the Victims of the Atomic Bombs. As an expert on international law with the title of former ambassador to France, he participated in closed-door conference deliberations.

The Japan Confederation of A- and H-Bomb Sufferers Organizations (Japan Hidankyo), among other organizations, has been calling on the Japanese government to pay condolence money for victims, while maintaining the illegality of the atomic bombings. The national government, on the other hand, has denied the bombings were illegal. Although Mr. Nishimura was a former government official, he appears to have held opinions aligned to some degree with the A-bomb survivor organizations.

During the advisory committee’s third session, held in July 1979, Mr. Nishimura stated that the “destruction” caused by the U.S. atomic bombings violated international law in times of war prohibiting the use of weapons that could cause “unnecessary suffering,” and his “affirmation that (the U.S.) is responsible for compensation for the unlawful act.” He urged the Japanese government to implement “the best possible measures,” since the government had not demand that the United States provide relief to the victims.

He also regarded it as a problem that the Japanese government’s relief measures were limited to those who were alive. With consideration regarding individual provision of condolence money, he said, “Something should be done for the hundreds of thousands of those who died in that instant and for their bereaved families.”

Mr. Nishimura died in November 1980, while he still sat on the advisory committee. He is believed to have been unable to attend the committee’s meetings during the latter half of his term. In December 1980, the month following his death, the advisory committee submitted its report to the then Health Minister Sunao Sonoda. Based on the notion of parity with ordinary victims of war and the concept of “perseverance,” the proposals for the condolence money and other measures were turned down.

The advisory committee report had a significant impact on the Atomic Bomb Survivors Relief Law, which was established in 1994 and continues to serve as the guidelines for support of A-bomb survivors. However, individual compensation for victims who died in the bombings or immediately after and their bereaved families, who Japan Hidankyo calls “the ultimate victims of the atomic bombings,” has not yet come to fruition.

Most of the advisory committee’s minutes were disclosed in response to requests for disclosure from the media in 2009, but the national government did not disclose the names of the individuals who made the remarks. Through requests from attorneys’ groups for plaintiffs of lawsuits regarding “black rain” after the Hiroshima atomic bombing, the government has finally disclosed information such as individuals’ names.


Expression of sympathy for providing relief to deceased
Comments by Toshinori Yamada, lecturer in international law at Meiji University

Kumao Nishimura not only provided a general argument regarding use of nuclear weapons but stated that he considered the atomic bombings of Hiroshima and Nagasaki to be in violation of international law and the United States to be responsible for compensation. His opinion was clearly at odds with that of the post-war Japanese government. He also expressed sympathy for providing relief to the deceased. I can surmise he regretted that Japan had to waive its claim rights for compensation against the United States because of the peace treaty. This is certainly a compelling record of remarks.