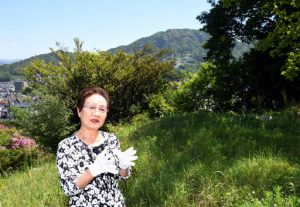 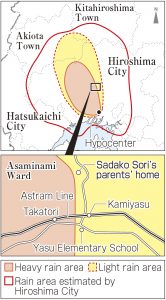 
“Black rain” fell over large area—Distance from hypocenter cannot determine damage
“A pitch-black cloud drifted from behind the mountains, and it became dark as night,” said Sadako Sori (nee Kaji), 81, who shared her memories of what happened to her at a distance of nine kilometers from the hypocenter at the time of the atomic bombing, August 6, 75 years ago. The former village of Yasu, now the Kamiyasu area of Asaminami Ward, lies in the northwestern part of the city of Hiroshima. The residential area is dotted with rice and vegetable fields in what are vestiges of its past.

Ms. Sori was seven years old and a first grader at Yasu National School (now Yasu Elementary School). When she was weeding the school grounds on that day, light flashed around her hands and a roar sounded as if “the world was turned upside down.” Shards of window glass rained on upper-class students at the school. When she began walking back to her home, there was a sudden shower of rain. She and her friend ran into a nearby shed and realized their “blouses were stained black.” When she arrived home, she found the paper sliding doors had been blown down, with scraps of paper flying all around her house.

Right after the atomic bombing, a rising air current formed, and “black rain” that contained radioactive particles and soot fell over a large area. At that time, Ms. Sori had no idea about what that rain was or what it meant.

Ms. Sori has been in poor health since her teens. Her body felt as heavy as lead. When she was around 40, she suffered from high blood pressure and severe anemia. She also developed colon cancer. She suspected that her poor health had something to do with drinking well water and eating vegetables contaminated by the black rain. In 2002, she formed a group of people who had experienced the black rain. Members included individuals living in the neighboring region of Aita.

A local meteorological observatory began to identify the area of rain shortly after the atomic bombing. In 1976, of the area that the observatory found had rain, the national government designated an oval-shaped region stretching northwest from the hypocenter as a “heavy rain area.” The area measures 19 kilometers north to south and 11 kilometers east to west. People who were in this area at the time of the atomic bombing are provided with health checkups free of charge, and if they develop diseases designated by the national government, they can obtain an Atomic Bomb Survivor’s Certificate. Nevertheless, Ms. Sori’s parents’ house was determined to have been in the “light rain area,” even though it was only several tens of meters from the “heavy rain area.”

The group called on the national government to enlarge the black-rain area, but the government continued to insist that “there is no scientific evidence” to do so. Said Ms. Sori, “It’s ridiculous that you cross a line and are in the light rain area. The national government’s system is so arbitrary.” Because members had aged, the group was disbanded five years ago. Ms. Sori “gave up” after she lost a lot of her strength and became exhausted.

Some people who live outside the “heavy rain area” have filed a class-action lawsuit with the Hiroshima District Court. A decision is expected to be handed down in July. If the plaintiffs win, there is the possibility that Ms. Sori’s neighborhood will be eligible for aid. She hopes that “everyone’s efforts are rewarded.”

Basic factors in determining the effects of the A-bomb’s radiation on health are distance from the hypocenter and initial dose of radiation one was exposed to at the time of the explosion. On the other hand, people caught in “black rain” argue they suffered internal exposure to radiation through breathing in, eating, and drinking radioactive particles and dust contaminated with radiation and that such radiation remained in their bodies. They emphasize that the radiation, even if the doses were not large, hurt cells locally and increased the risk of contracting cancer.

Megu Otaki, 69, a specialist in biostatistics and professor emeritus at Hiroshima University, has long been involved in research at the university’s Research Institute for Radiation Biology and Medicine, located in Hiroshima’s Minami Ward. “It was not only rain that fell on Hiroshima,” he said. “We should also concentrate on the movement of the air that contained radioactive particles and dust contaminated with radiation.”

The problem is not just the instant the bomb exploded. Mr. Otaki looked into the primary causes of increased risk of dying from solid cancers among Hiroshima survivors who were exposed to the A-bomb’s radiation within two kilometers from the hypocenter. Several years ago, jointly with other researchers, he published research findings that pointed to the great effect inhalation of dispersed radioactive particles had even on those directly exposed to the A-bomb radiation.

Mr. Otaki said, “We need to change the idea of estimating health effects using direct distance from the hypocenter.” He also explained that it was hard to measure the survivors’ exposure doses now, with the only way doses can be estimated is through use of the number of their chromosomal abnormalities.

Internal exposure to radiation is not fully understood. The Radiation Effects Research Foundation, located in Minami Ward, began conducting epidemiological surveys on atomic bomb survivors in the early post-war days. The organization says that if the accumulated radiation doses are the same, there are no differences in effects on human health between internal and external exposure. Opinions are divided on this issue.

A “void” exists concerning damage that cannot be explained only by the explosion. This is not simply a problem limited to the effects of the atomic bombing 75 years ago.