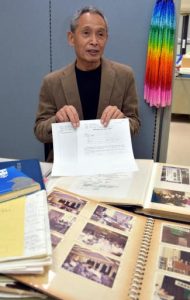 The Hiroshima Prefectural Hidankyo was formed in 1956, 11 years after the atomic bombing of Hiroshima. The organization has engaged in such activities as demanding compensation from the Japanese government for the damage caused by the atomic bombing and calling for the abolition of nuclear weapons. The organization currently consists of about 30 groups in 15 cities and towns in the prefecture, including Fukuyama City and Kure City. On the other hand, an increasing number of groups have ended their activities due to the aging of A-bomb survivors, with the Kozan A-bomb suffers’ group in the town of Sera-cho disbanding in July of this year.

The collection of materials is part of a project to commemorate this year’s 75th anniversary of the atomic bombing and the 65th anniversary of the founding of the organization to be marked next year. The organization is collecting such printed matter as notices and leaflets at the time each group was established, bulletins, bylaws, membership lists, commemorative publications, meeting materials, and memoirs, as well as other actual materials, such as cloth sashes utilized in street campaigns. Correspondences related to A-bomb survivor movements and personal documents, such as diaries and notes, are also being collected.

This fiscal year, as a first step, the Hiroshima Prefectural Hidankyo will investigate the existence and current condition of the materials. This month, a questionnaire was sent to each member group inquiring about its preserved materials. The organization is also widely calling on A-bomb survivors and bereaved families who possess material for their help in providing information.

The Hiroshima Prefectural Hidankyo hopes to work jointly on the project with other A-bomb survivor groups in the prefecture, including the other Hiroshima Prefectural Hidankyo (chaired by Kunihiko Sakuma), which has conducted its own activities since 1964, when the movement to ban A- and H-bombs split over the nuclear tests carried out by the former Soviet Union and other issues. After investigating the collected information and materials, the organization will explore the best way to preserve the materials in the future with cooperation from the Hiroshima Peace Memorial Museum (located in Hiroshima’s Naka Ward).