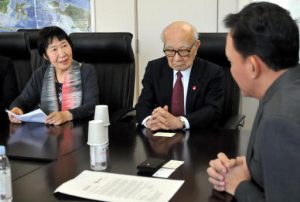 by Kyosuke Mizukawa and Yo Kono, Staff Writers


“A job for those who survived”
Disappointment with Japanese government ignoring TPNW
Early this year, seven members of the Japan NGO Network for Nuclear Weapons Abolition paid visits to the Indonesian and Mongolian embassies in Tokyo. The organization is comprised of NGO groups such as the Japan Confederation of A- and H-Bomb Sufferers Organizations (Nihon Hidankyo). In 2017, the United Nations adopted the Treaty on the Prohibition of Nuclear Weapons (TPNW), but the number of signatory nations has not yet reached 50, the minimum required for the treaty to be effected. With that, the members worked to encourage nations that are generally supportive of the TPNW to accelerate ratification of the treaty.

Nobody else should experience the same horror survivors experienced

In Tokyo, Toshiko Tanaka, 81, an A-bomb survivor living in Higashi Ward, Hiroshima, spoke about how “I don’t want anybody else to have the same horrific experience I had.” Ms. Tanaka is one of the survivors who participated in a worldwide tour organized by Peace Boat, a non-governmental organization based in Tokyo, and repeatedly shared their A-bomb experiences in numerous locations overseas.

Until about one week before the atomic bombing of Hiroshima, Ms. Tanaka lived in Kako-machi (now part of Naka Ward), located about 700 meters to the south of the A-bombing hypocenter. She attended the kindergarten located about where the main building of the Hiroshima Peace Memorial Museum now stands and later attended Nakajima National School in the same neighborhood.

She experienced the atomic bombing at her home in Ushita-machi (now part of Higashi Ward), to which she had just moved. The neighborhood was about 2.3 kilometers from the hypocenter, and she suffered burns on her right arm and her head. When young, she often experienced overwhelming fatigue. Later, she married and raised two children. “I have concerns that my children’s health could be affected by my exposure to A-bomb radiation. A-bomb survivors are forced to bear heavy psychological and physical burdens throughout life.”

Many of her classmates from kindergarten and the national school were killed in the atomic bombing. Before escaping the scene, her mother’s cousin picked up the head of a family member from among the ruins and put it in a bucket, driven by a sense that it should be buried in a grave. All four members of the family of her husband’s uncle died in the bombing. Now, in place of her late husband, Ms. Tanaka continues to pray for the repose of their souls.

Ms. Tanaka said, “Whenever I think about the regrets of those who suddenly lost their lives that day, I feel I have to do something for them. To realize the ban and elimination of the world’s nuclear weapons is a job for those who survived.” She strongly hopes that the Japanese national government can be an ally in that fight.

However, while the government has indicated it shares the goal of elimination of nuclear weapons, it has turned its back on the TPNW by arguing the treaty would impair the rationale of the U.S. nuclear deterrence. Japan, in fact, did not participate in the negotiations at the United Nations to establish the TPNW. In reality, the Japanese government has consistently preached that American nuclear weapons are a necessary evil for Japan at present, a stance that has greatly disappointed A-bomb survivors.

Nihon Hidankyo released “Basic Demands of A-Bomb Survivors” in 1984, a document that urged the Japanese government to compensate them for damages caused by the atomic bombings, as well as to take actions toward prohibition and elimination of nuclear weapons by defining them as an “absolute evil.” The reason the group positioned the appeals as the two main pillars in the document was to reject Japan’s stance of relying on a doctrine of perseverance, which posits that everyone should accept and endure damage that the public suffers as a result of war.

The document of A-bomb survivors’ basic demands stressed that if the sacrifices of Hiroshima and Nagasaki were ever to be considered unavoidable, it would lead people to tolerate nuclear war. To never again suffer such damages from atomic bombings in the future, the group considered that the two appeals were indispensable.

Since 2016, Nihon Hidankyo has worked on a signature-collection campaign that seeks ratification of the TPNW by all the world’s nations. Listed as one of the initiators of the campaign from its inception is Mikiso Iwasa, 91, an advisor to the organization who lives in Funabashi, Chiba Prefecture. Mr. Iwasa continues to be engaged in the activities led by the A-bomb survivors.

On that day 75 years ago, Mr. Iwasa had no option but to escape without rescuing his mother, Kiyoko, then 45, who was trapped under their home in the path of the fires that followed the bombing. He also lost his younger sister, Yoshiko, who was 12. He used to fondly call her Yo-chan, but her remains were never found. With the objective that he would not let his family’s deaths be in vain, he has stood on streets and collected signatures for the campaign.

As of January this year, the total number of signatures reached about 10 million. The aforementioned Ms. Tanaka, who normally engages in peace activities on her own, also cooperated with the campaign, collecting about 300 signatures. Mayors of 1,232 municipalities, accounting for 70 percent of the local governments throughout Japan, have also signed on to the campaign. Even some lawmakers from Japan’s ruling and opposition parties have expressed their support of the campaign. The A-bomb survivors are using the last of their energies to enlarge the circle of signatures. Nonetheless, the Japanese government remains uninvolved.

Keeping in mind the untold distress of those who died in the atomic bombings, the A-bomb survivors have demanded that the Japanese government provide compensation and act toward elimination of nuclear weapons as the responsibility of the nation. The world is about to enter an era marked by an absence of survivors still alive, with persistent “voids” left unresolved. Can we accept that situation? Their backs bent by time pose that question to the government and all people of this A-bombed nation.