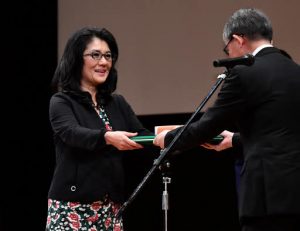 Around 300 representatives of member companies from the newspaper industry, wire services, and broadcasters attended the convention. Toshikazu Yamaguchi, executive director of operations of the NSK association and president of the Yomiuri Shimbun Group, said in his address, “I hope many people once again recognize the value of accurate and high-quality information and the public role of newspapers.” At the same time, Mr. Yamaguchi touched on NSK’s reorganization of its awards this fiscal year into the single category of the Editorial Division Awards.

At the NSK Association Awards Ceremony, the Chugoku Shimbun’s “Striving to fill voids in Hiroshima” series was recognized for its outstanding investigative reporting that exhibited the power of journalism to prevent memories from fading. The work was the result of the newspaper’s effort to demonstrate that historical voids can be filled even 75 years after the atomic bombing by identifying names of victims not listed in official records and details about unknown victims’ remains.

On behalf of the Chugoku Shimbun, Yumi Kanazaki, 50, executive director of the Hiroshima Peace Media Center, accepted a certificate for the award. The 140,000 plus-minus 10,000 figures, often cited as numbers of victims who died in the atomic bombing of Hiroshima by the end of 1945, were called “an estimate” by Ms. Kanazaki. “No question, the lives of many dead fell into ‘voids’ in Hiroshima. Recording evidence of the existence of each and every person is the starting point for news coverage rooted in Hiroshima of the atomic bombing and peace issues,” added Ms. Kanazaki.

Ichiro Suzuki, once a key figure in U.S. Major League Baseball, delivered a commemorative speech at the event. Ichiro’s address was followed by a workshop on the theme “Issues in newspaper editing and the news business amid the corona pandemic.”

Besides the Chugoku Shimbun, the awardees of the Newspaper Publishers & Editors Association Awards and News Business Award were as follows.

Newspaper Publishers & Editors Association Awards-winning works
“No announcement about mistaken collection of remains of overseas war dead” an investigative series, by the Japan Broadcasting Corporation; Investigative series of violence among teachers and series of articles about education in Kobe City, by the Kobe Shimbun; “Covid-19 hospital ward for critical cases: Doctors on the frontlines,” by Fuji Television Network; “Burned symbol of Okinawa,” by the Okinawa Times; “Living in Japan,” a crusading journalism report investigating the right of non-Japanese children to an education, by the Mainichi Shimbun Tokyo Head Office.