Striving to fill voids in Hiroshima 75 years after the atomic bombing—Duty passed on to next generations, Part 2: Search for bereaved families 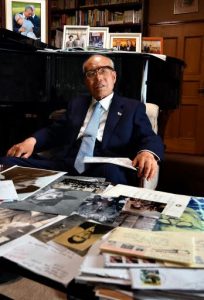 “There are likely more to be found”
A-bomb survivor hopes young people will continue effort
by Yuji Yamamoto and Minami Yamashita, Staff Writers

Among the estimated 70,000 victims’ remains buried under the Atomic Bomb Memorial Mound in Hiroshima Peace Memorial Park in the city’s Naka Ward, the names of 814 have been identified. The Hiroshima City government creates posters each year listing the names and sends them throughout Japan to provide the opportunity for bereaved families to claim the remains. During the last 10 years, however, the remains of only two victims were returned to families. Based on the Chugoku Shimbun’s reporting, the remains of “Haru Kajiyama (last name on list in Japanese: 鍛冶山), Minami-machi 3-chome)” will likely be the third such case.

The research division of the Hiroshima City Atomic Bomb Survivors Relief Department has completed an investigation into supporting evidence regarding the victim’s identity. With the spread of the coronavirus, the process has been slowed, but Ms. Kajiyama’s remains will be handed over to her family members as soon as their wishes concerning this matter are confirmed.

The clue in identifying Ms. Kajiyama’s remains existed in the data about the names and photographs of 23,000 victims collected by the Hiroshima National Peace Memorial Hall for the Atomic Bomb Victims. The Chugoku Shimbun checked the names of the 814 victims to confirm whether there were victims with the same or similar names among the victims’ information kept in the hall. It was at that point that the photograph of “Haru Kajiyama (her last name indicated with the kanji characters: 梶山), Minami-machi 3-chome)” appeared on a screen.

The Chugoku Shimbun tracked down her grandson Taketo Kajiyama, 84, a resident of Hiroshima. Hearing our explanation, he said, “The kanji for her name were incorrect, but I’m sure it’s my grandmother.” A sob escaped from his lips. He said he never imagined that her remains were kept under the Atomic Bomb Memorial Mound.

Through the newspaper’s efforts to connect remains and bereaved families yet unable to claim them, we came to realize the hardships that the late Toshiko Saeki experienced. For more than 40 years, Ms. Saeki, who lost 13 family members and relatives in the atomic bombing, continued her work of cleaning the memorial mound while searching for bereaved families of victims who would claim the remains.

Passing years make barriers more formidable. To continue on and find the fourth and fifth cases will be no easy task. New ways of gathering information not available in Ms. Saeki’s time must be discovered. Hard as it may be, governments and citizens must carry on Ms. Saeki’s feelings for the victims and continue striving to fill the “voids” involving victims’ remains.

Shigeaki Mori, 83, an A-bomb survivor living in Nishi Ward, has long investigated American prisoners of war (POWs) killed in the Hiroshima atomic bombing and Allied Forces POWs who were in Nagasaki at the time of the bombing there. Mr. Mori helped register the names and photographs of more than 30 victims at the National Peace Memorial Hall for the Atomic Bomb Victims both in Hiroshima and Nagasaki.

He began his investigations when he learned that bodies of U.S. POWs killed in the atomic bombing of had been found at Seibi National School, which was affiliated with the Hiroshima Army Kaikosha. Mr. Mori was once a student at the school, located 700 meters from the hypocenter. He had transferred to another school before the atomic bombing and thus survived, but he was never indifferent about what happened.

Since so much was unknown about the U.S. POWs, he set about to collect information. When he found depictions of U.S. POWs in the “A-bomb Drawings by Survivors” stored at the Peace Memorial Museum, he spoke with those who did the drawings. Using American telephone directories and materials from the U.S. military, he continued searching for the victims’ bereaved families “to convey to them the truth about the deaths of their family members killed in the atomic bombing.”

Some who he contacted made insensitive remarks. “What do you want? It’s too late now,” for example. At his own expense 22 years ago, Mr. Mori erected a plaque to memorialize the U.S. POWs where their camp was located and on his own held a memorial service. “Wait until I let the world know about your deaths,” he intoned there while shedding tears of sorrow.

He gradually came to have more supporters and gather more information. He discovered the whereabouts of the bereaved families of 12 U.S. POWs and helped the names of 10 victims be included in the register of the A-bomb victims, since the other two had already been registered.

Mr. Mori met U.S. President Barack Obama when the president visited Hiroshima in 2016, and his efforts came to be recognized worldwide. In addition to U.S. POWs, Mr. Mori has been helping the names of French and Italian nuns who were in a Hiroshima convent be included in the register of the A-bomb victims. “There are likely more to be found,” said Mr. Mori. “I hope young people will continue this effort.”

The names of remains of many A-bomb victims have not been discovered, including those of White Russians who fled the Russian Revolution. Believing there is no difference in the value of lost lives and the sorrow of victims’ families, Mr. Mori has always been determined to never forget the death of each of the victims. His determination raises the question among our generation about what efforts we should make to fill such “voids” in the future.