Striving to fill voids in Hiroshima 75 years after the atomic bombing—Kikuma Michihara’s remains claimed by family in Hatsukaichi: “Welcome back” 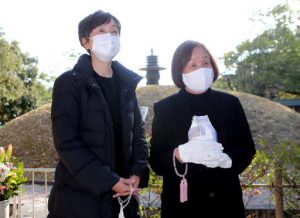 
Michihara’s remains found in Riken survey after A-bombing
On December 8, Kiyoko Iwata, 83, a resident of Hatsukaichi, said, “Welcome back,” as she claimed the remains of her older brother Kikuma Michihara. Her brother’s remains had been enshrined in the Atomic Bomb Memorial Mound in Hiroshima Peace Memorial Park, located in the city’s Naka Ward, after the remains were handed over to the Hiroshima City government by the Institute of Physical and Chemical Research (Riken, headquartered in Wako, Saitama Prefecture) this past November. Since that time, the city government had been searching for the bereaved family members of Mr. Michihara, who was from the village of Yoshiwa (now part of Hatsukaichi City).

The remains were discovered in Riken’s former office building in Tokyo in January last year. Mr. Michihara’s remains were believed to have been taken to Tokyo by a group of researchers who had entered Hiroshima shortly after the atomic bombing. The name Kikuma Michihara was written on a bag that contained the remains in Chinese characters, one of which was different from that of Mr. Michihara’s actual name. Mr. Michihara, an army soldier, experienced the U.S. atomic bombing on August 6, 1945. According to records, he was taken to the Ujina branch of the Hiroshima First Army Hospital but died on August 31 at the age of 18. After studying different records, the city government concluded that the remains were those of Mr. Michihara.

On December 8, Ms. Iwata and her daughter Miki Kono, 59, a resident of Hatsukaichi, visited the Atomic Bomb Memorial Mound and received her brother’s remains in a special container from Minoru Hataguchi, president of the Hiroshima Society for Praying for the War Victims, which manages the memorial mound. Smiling faintly, Ms. Iwata said, “He (Kikuma) must have gone through terrible suffering. I want to say ‘Welcome back’ to my kindhearted brother. We’ll spend tonight with him, and I will then lay his remains in the family grave back in our hometown of Yoshiwa.”

Ms. Kono, who went through the formalities of requesting the city government for an investigation into identification of the remains, said, “I was able to do something for my mother and also learn new facts about the harm the war brought to my family.” Ms. Iwata’s eldest brother Teruo was in the navy and died in Palau, which was the site of a hard-fought battle during the Pacific theater of World War II. But his remains have not yet been returned. Now that Kikuma’s remains have come back, Ms. Kono said she hoped to seek information on Teruo.