Striving to fill voids in Hiroshima 75 years after the atomic bombing—Duty passed on to next generations, Part 5: Conveying reality of A-bomb damage 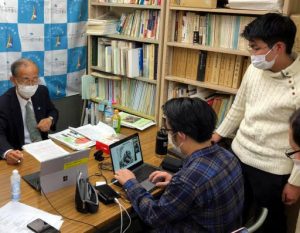 Many roadblocks remain in the way of complete understanding of the actual damage from the atomic bombings, including censorship of information by occupying armed forces during the post-war occupation period, confiscation of research documents by U.S. military forces, the Japanese national government’s previous passive attitude about investigating the reality of the A-bombing damage, and in particular the unique characteristic of nuclear weapons whereby all city systems such as governmental and medical functions are instantly annihilated.

The closer to the hypocenter, the more likely entire families were killed in the atomic bombing. If they had few connections with neighbors at the time of the bombing, their deaths were less likely to be captured in the Hiroshima City government’s surveys of A-bomb victims. In the case of one family of a military member from Toyama Prefecture who had just moved to Hiroshima prior to the bombing, the names of four family members—his wife and children excepting the soldier himself—had not been identified by the surveys until recently.

Many remains of unidentified A-bomb victims lie underneath the Atomic Bomb Memorial Mound in Hiroshima Peace Memorial Park, located in the city’s Naka Ward. The ground temperature around the hypocenter is estimated to have reached 3,000 to 4,000 degrees Celsius. The ultra-high temperatures burned alive the people in the area at the time of the bombing, making the task of confirming identities extraordinarily difficult.

Those who experienced and survived the atomic bombing face health risks from A-bomb radiation. Research is still ongoing into late effects that developed some time after the atomic bombing. An increase in myelodysplastic syndrome (MDS) cases, for example, became evident among survivors 60 years after the bombing. “It appears that A-bomb survivors continue to be tormented by the atomic bombing throughout their lives,” said Nanao Kamada, 83, a hematologist and professor emeritus at Hiroshima University.

Moreover, as no conclusion has been reached regarding whether second-generation A-bomb survivors have any genetic effects due to their parents’ exposure to radiation, they must continue to live with concern. The atomic bombing causes suffering even in generations unrelated to the war.

The numerous facts that have yet to be clarified about the atomic bombing speak to the inhumane nature of nuclear weapons. Driven by the wish survivors have because of their A-bombing experience, A-bomb survivors groups have made desperate appeals for the elimination of nuclear weapons, as well as for compensation for deceased victims and provision of aid to survivors.

Three years ago, based on the idea of focusing on the “inhumanity of nuclear weapons,” the Treaty on the Prohibition of Nuclear Weapons (TPNW) was adopted by 122 nations and regions. The A-bomb survivors’ appeals helped accelerate the treaty negotiations, with the word “hibakusha” (A-bomb survivor) being incorporated into the treaty’s preamble.

However, the Japanese national government went along with nuclear-armed nations and did not join in the negotiations at the United Nations for TPNW establishment. The reason had to do with Japan implementing a security policy that relies on the nuclear umbrella provided by the United States. For survivors who were forced to change their lives in such a cruel way after losing loved ones and to continue fighting against diseases brought about by the atomic bombing, it is intolerably painful for them to face the fact that their nation’s government considers the weapons a necessary evil.

Government does not exhibit attitude of representing survivors

The government has the responsibility of engaging in diplomacy, but it fails to fully represent the voices of A-bomb survivors to the international community. Amid such a situation, a group of people that includes Toshiko Tanaka, 81, an A-bomb survivor living in Hiroshima’s Higashi Ward, visited the Indonesian Embassy and other overseas embassies early this year, based on the mission as survivors to convince those governments to fulfill their duty of realizing the prohibition and elimination of nuclear weapons. The group urged the embassy representatives to pursue early ratification of the TPNW in their respective countries.

Yuta Takahashi, 19, a second-year student at Keio University and resident of Yokohama, joined the group on the embassy visit. He had been engaged in peace activities and interviews of survivors since he was a student at Eishin Junior and Senior High School in Fukuyama City. Now, Mr. Takahashi works on Hibakusha Appeal, a signature-collecting campaign that pursues the abolition of nuclear weapons.

In Tokyo, Mr. Takahashi felt there was a difference in degree of enthusiasm for elimination of nuclear weapons among the people there, because he thinks that many young people in the capital have the sense that the damage from the atomic bombing happened a long time ago. Under the circumstances in which few opportunities exist for A-bomb survivors to share their A-bombing experiences due to the coronavirus pandemic, he and his fellow students held online events in March and May to listen to survivor testimonies. During the events, university students had a chance to interact with A-bomb survivors on a video-conferencing platform. Mr. Takahashi said, “Rather than thinking about hibakusha based on a vague image, I want to create opportunities for young people to understand that survivors are individuals with names, think about the significance of the lives lost in the bombing, and listen to survivors’ tragic experiences.”

How much damage was really wrought by the single atomic bombing of Hiroshima? A-bomb survivors, citizens, governments, and researchers in the A-bombed Hiroshima are making efforts to answer this question by finding out facts, filling voids in information, and conveying their message to others. Their efforts are also a manifestation of Hiroshima’s wish that the absolute evil of nuclear weapons’ use must never be repeated. Are the governments of the A-bombed nation as well as those of nuclear nations sincerely taking Hiroshima’s wish head on? On earth, there still exist more than 13,000 nuclear weapons.