Striving to fill voids in Hiroshima 75 years after the atomic bombing—Recreating cityscapes: Hadabesso 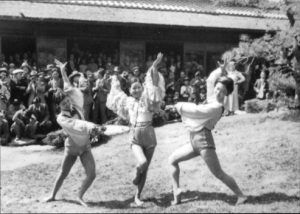 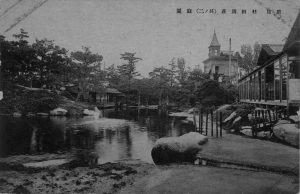 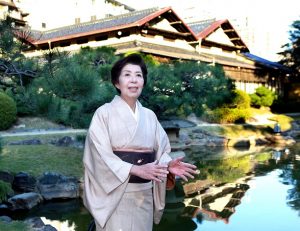 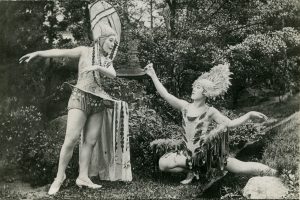 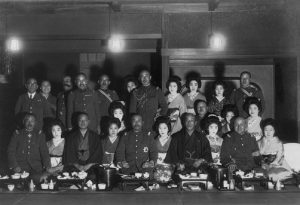 
Restaurant an exciting world of dancers and parties before destruction in A-bombing
Before World War II, Hadabesso, a traditional Japanese restaurant located in the area of Funairi-machi, in Hiroshima’s Naka Ward, was akin to a theme park where both children and adults could enjoy themselves. After being destroyed in the atomic bombing, the restaurant was reborn from amidst the burned ruins of the city. The Chugoku Shimbun herein traces the history of Hadabesso before and after the war based on an album of photographs that Etsuko Hada, 71, the proprietress of Hadabesso, retained from her predecessors and on photos donated by the late Katsuko Matsunaga, who was once a member of the Hadabesso Girls Revue dance company.

One of the photos shows dancers posing in front of men with cameras. The image appears to have been taken in the restaurant’s garden area around 1938 and speaks to the festive atmosphere of the time.

In 1900, the late Kenjiro Hada opened Hadabesso as a tea house. It was located near Nishi-yukaku, Hiroshima’s licensed red-light district. After the purchase of fields in the neighborhood, the restaurant, at its peak, sat on a piece of property stretching about 13,000 square-meters. Hadabesso was well known for its zoo with such animals as a leopard and a camel and became famous as a cherry-blossom viewing spot.

A brochure for the Showa Industrial Exhibition, an event held in Hiroshima in 1929, described Hadabesso as having a simple cafeteria and being a place at which visitors would never grow tired even after half a day and into the night. Another description in the brochure announced the best places to go for a family with children were the industrial exhibition and the Hada Zoo at Hadabesso. In particular, the Hada Revue show had acquired a good reputation since its first performance in December 1918. The troupe once had about 50 members and performed comedies and dance shows in numerous locations. The dancers’ gorgeous costumes, said to have been tailored in Tokyo and Osaka, also attracted considerable attention.

Nevertheless, in 1941, just before the Pacific theater of World War II had begun, the dance company was disbanded. At that time, the Hadabesso building was used as the official residence for the commanding officer in Japan’s Western Military District. On August 6, 1945, the area within a radius of about one kilometer from the hypocenter was burned to the ground. According to the Record of the Hiroshima A-bomb War Disaster, 87 corpses were found on site at the Hadabesso restaurant. Toshiro Hada, who had taken over the business from Kenjiro, also perished in the bombing.

Surviving were Michie Hada, Toshiro’s wife who was situated behind a mound in the garden at the time of the bombing, and Tokuji Hada, Toshiro’s eldest son (who died at age 74 in 2012) who had evacuated from Hiroshima. In 1948, the reception area of Hadabesso was rebuilt to serve as a space for the occupying military forces of Japan to entertain guests. The restaurant is beloved by famed personalities in the political and business worlds as well as by celebrities. Four years ago, it served as a lunch venue at the time of the G7 Foreign Ministers Meeting, for which then U.S. Secretary of State John Kerry and other foreign ministers gathered in Hiroshima.

Hadabesso now stands as the oldest Japanese restaurant in Hiroshima, celebrating its 120th anniversary this year. It is facing new adversity in the form of the coronavirus pandemic. To follow the last wishes of Tokuji Hada, her deceased husband, Etsuko has kept a positive attitude. “Thinking of hardships experienced by those going before us who survived the atomic bombing, I simply can’t be discouraged. I’ll continue to keep the restaurant as it is today,” said Ms. Hada.