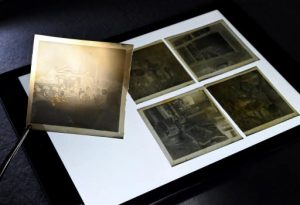 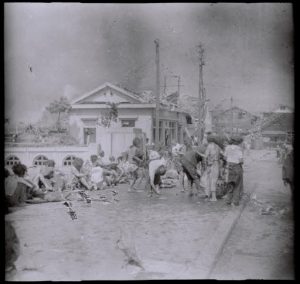 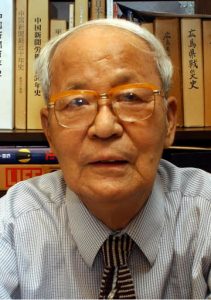 
Negatives of Yoshito Matsushige, former staff photographer for Chugoku Shimbun, first to be designated important cultural properties
On March 26, the Hiroshima Municipal Board of Education designated five negatives of photographs taken on the day of the atomic bombing as important tangible cultural properties. The photos were taken by Yoshito Matsushige (1913-2005), former staff photographer for the Chugoku Shimbun. They depict the horrific experiences of Hiroshima citizens on the day of the atomic bombing of the city. By its action, the board of education acknowledged the historical importance of the photos, which convey the horrors of the bombing. They are the first photographic negatives related to the atomic bombing to be designated as important cultural properties.

On August 6, 1945, the date of the bombing, Mr. Matsushige was working as a staff photographer for the Chugoku Shimbun and was also a member of the Chugoku District Military Headquarters’ news team. When the atomic bombing happened, he was at his home in the area of Midori-machi (now Nishi Midori-machi, Minami Ward). Shortly after, he took a photo of the wounded at the west end of the Miyuki Bridge, about 2.2 kilometers southeast of the hypocenter. Among the four other photos is one of his house, which also served as a barbershop. The home’s window frames appear to have been blown away that day.

Mr. Matsushige’s photos show the desperate conditions victims experienced underneath the mushroom cloud on the day of the bombing and have been exhibited both in Japan and overseas as the only existing photos taken on the day of the bombing. They are on display at the Hiroshima Peace Memorial Museum in the city’s Naka Ward. Rights to the negatives are held by the Chugoku Shimbun at Mr. Matsushige’s request.

The city’s board of education sought advice from the city council regarding important cultural properties, and the council reported to the board that it was appropriate to designate the negatives as such. During the board of education’s meeting on March 26, the board decided to designate the negatives as important cultural properties after hearing explanations regarding the fact that the party holding the rights to the negatives had requested two years ago that they be designated as such, and about an expert’s opinion describing designation as necessary to prevent the negatives from deteriorating.

According to the city government, it is rare in Japan for negatives of photos taken during and after the Showa Era (1926–1989) to be designated as important cultural properties. The city’s Cultural Promotion Division made the statement, “The negatives are precious and essential in handing down the reality of the atomic bombing to future generations. With support from the party holding the rights to the negatives, we hope to create an environment in which they can be preserved in good condition.”


Commentary: Responsibility for passing down photos to posterity
by Junji Akechi, Staff Writer

What happened to people underneath the mushroom cloud immediately after the atomic bomb was dropped by the United States? The five negatives of the photos taken by Yoshito Matsushige make up the only photographic record of people’s experiences on that fateful day 76 years ago. The negatives have been designated as the city’s important tangible cultural properties because their historical importance as an original record is highly regarded.

Quite important is the fact that a survivor of the atomic bombing was the one that captured the images through photos. As the photographer remarked in later years, the fact that one photo was taken from behind people and that he was able to only take five photos testify to the chaos and his fear and hesitation at that time. This record was created through the eyes of a citizen of the city completely devastated by a new and unfamiliar weapon.

But the photos, as a historical record, face the risk of degradation. The former Japanese military, news media, and the U.S. military also took photos of Hiroshima after the atomic bombing, but some of those originals have been lost. Ms. Matsushige’s negatives have deteriorated over time, according to the expert that examined them. The designation has once again brought into focus our duty to hand down the precious historical record to future generations.

As A-bomb survivors age, the importance grows of photographic records of the horrors brought about by the nuclear weapons. Who took the photos? Why were they taken? What was happening inside and outside the photo frames? To deal with such “silent witnesses” with appropriate care, we must learn and imagine many things. To fully utilize photos that have been preserved, we are called on to make constant effort.