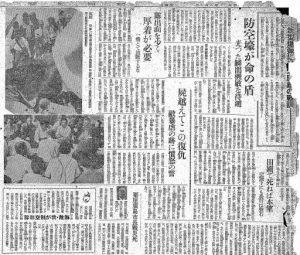 Natsue Yashima was 27 years old. She desperately managed to enter the city of Hiroshima and make her way on foot in the direction of the Chugoku Shimbun office. Above all else, she wanted to confirm if her family was safe. Ms. Yashima’s personal account of that time, which she submitted with an application for an Atomic Bomb Survivor’s Certificate, vividly reported interactions with others at her company office, located in Kaminagarekawa-cho (now part of Hiroshima’s Naka Ward). More than 10 people were at the building on August 7, the day after the headquarters had been completely incinerated in the atomic bombing.

In her account, she wrote, “Someone told me it would be a waste of effort to go, but I left for my home in the area of Hiratsuka-cho. While replicating the route in my head, I aimed for a water tank and arrived at my destination.” She had been living with her family, including Mineko, her mother who was then 66, in the present-day area of Nishihiratsuka-cho, in Hiroshima’s Naka Ward. Her account continued, “I carefully searched, but there were no bodies around my home or the neighborhood. I became convinced my mother was still alive and finally felt encouraged. I then returned to the Chugoku Shimbun office.”

On August 7, the Hiroshima Prefectural Office issued a notice from the governor, distributing leaflets to inform people that medical aid stations had been set up and opened at the Army’s Clothing Depot buildings, which even now remain standing in Minami Ward, and the Furuta National School (now located in Nishi Ward). Relief aid operations began amid a state of extreme chaos. The Japanese Imperial Army’s Shipping Command, which had avoided serious damage thanks to its location next to Ujina Port, sent personnel soon after the bombing to the aid stations and thereby took the lead in medical relief work.

Ms. Yashima became a member of Kudentai, a group that “worked to deliver news orally as no paper was available at that time,” according to her account, traveling around the devastated city on the back of a truck. While communicating the news in this way, she set about searching for her mother and her older sister, Mitsue Yashima, then 31, who was a teacher at Hiroshima Girls’ Commercial High School. She ultimately learned that her mother was at Hijiyama (now part of Minami Ward).

Based out of the temporary prefectural office established in the Higashi (East) Police Station, which had escaped the flames, Kudentai’s members orally communicated various kinds of information, including where wounded victims had been taken, routes of special distribution of provisions, and the immeasurable extent of A-bomb damage in the city. “The members also told the citizens not to worry,” as indicated in an excerpt from the personal account written by Haruo Oshita, then 42, the proofreader supervisor, in reference to Kudentai. Mr. Oshita was also a Kudentai member (his account of that time appears in “Hiroku Dai Toa Senshi” [Secret Records of the Greater East Asia War], a history published in 1953).

On August 21, the prefecture prepared a memo concerning “The matter of damage from the August 6 air raid on Hiroshima and measures being undertaken” (now stored at the Hiroshima Prefectural Archives), which revealed the purpose for the establishment of Kudentai and duties asked of the journalists. “Through utilization of orally reported news and news plastered on walls, we worked to ensure that governmental policies are announced when the occasion calls for it, that the psychological health of citizens is restored, and that morale is lifted.”

Journalists in wartime were considered “media soldiers.” Under press controls by the military and the government, the news that could be delivered was only the information permitted by the authorities for disclosure. On August 7, the day after Hiroshima was devastated in the bombing, Japan’s Imperial General Headquarters, the most powerful governmental authority at the time, made its announcement that Hiroshima had suffered considerable damage from a new type of bomb.

With the headline “Hiroshima’s wartime lesson,” the Asahi Shimbun newspaper published at its Seibu (West) Headquarters on August 10 ran a photo with the caption “A female press corps member gently encourages war victims.” Was the woman in the photo Ms. Yashima, the Kudentai member engaged in the work of editing the Chugoku Shimbun (two-page newspaper at the time) in its copy editing department?

Because that printed newspaper was not preserved, the Chugoku Shimbun asked Harumi Yashima, 83, Ms. Yashima’s niece who lives in Asaminami Ward, to look at the page in question, which was printed from microfilm, for confirmation. Harumi, however, said she was unable to make a clear judgment. “The contours of this woman’s face resemble hers, but…,” she said.

Worked for Kudentai until end of war

Daijo Yamada, 66, Ms. Yashima’s oldest son, lives in Tokyo. “My mother was 157 centimeters in height, tall for a woman born in the Taisho Era. I have heard she was a pretty good volleyball player,” he said. According to documents in the possession of the alumni association of her alma mater, the Hiroshima Prefectural Girls’ High School (now Minami High School), her school’s volleyball team won the national volleyball championship for junior high school girls for the first time in 1934. Her position was discovered to have been a rear back in nine-person volleyball.

Ms. Yashima engaged in Kudentai work until the end of the war. She wrote, “Because I was allowed to work independently, I searched around everywhere for my sister. Before long, I was vomiting blood, passing bloody stools, and no longer able to walk.” She risked her own life to communicate news by word of mouth.