Striving to fill voids in Hiroshima—Children’s resolve recorded in writings two years before A-bombing: Unite with 100 million others to protect homeland 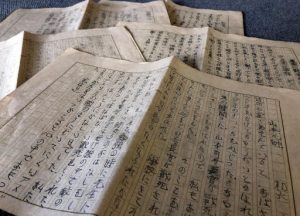 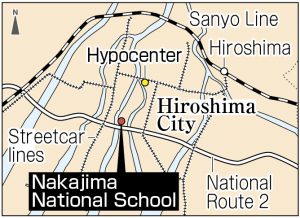 Eighteen wartime essays written in 1943 by schoolchildren at Nakajima National School (now Nakajima Elementary School, located in Naka Ward), the school devastated in the atomic bombing on August 6, 1945, have been discovered. The handwritten essays had been kept at the home of Kotaro Kawaguchi, a teacher at the school in those times who died in 2003 at the age of 92. Some of the children essayists were killed in the atomic bombing two years later with their remains unidentified to this day. As such, the essays represent important historical artifacts.

The essays were written in 1943 on sheets of standard manuscript paper by 17 female students who were in the sixth grade. The students generally selected one topic from among three themes: “Resolutions for the new academic year,” “Death in battle of Isoroku Yamamoto, the combined fleet’s Commander,” and “Gratitude to farmers for food production.” One of the students wrote two essays on different themes.

The essays include descriptions such as, “I hope to take good care of students in younger grades and serve as a role model for them,” an expression of the writer’s enthusiasm as a student in the highest grade at school. Among the essays were other ideas expressed, such as, “I will unite with 100 million fellow citizens and devote myself to protecting the homeland.” From the writings can be seen the effects of the students’ wartime education.

Mr. Kawaguchi, the teacher who had kept the essays, graduated from Hiroshima Prefectural Normal School (now Hiroshima University) and, from July 1941 until June 1945, worked at Nakajima National School. Starting in April 1945, Mr. Kawaguchi stayed in the town of Mirasaka-cho (now part of Miyoshi City, Hiroshima Prefecture) to serve as a guardian for children evacuated from Hiroshima City because of the war. On August 6 that year, however, the date the U.S. military dropped the atomic bomb on Hiroshima, he was working at Kouchi National School (now Kouchi Elementary School, in Saeki Ward), after being transferred there.

When Japan’s former Ministry of Welfare requested the submission of accounts of A-bombing experiences in a fact-finding survey of A-bomb survivors, Mr. Kawaguchi described the moment of the bomb’s detonation. “After the school’s morning meeting was concluded, there was a flash of light when I was near the shoe locker area. A short time later, I heard a huge roar and discovered the A-bomb cloud rising up over the top of the mountains to the east,” he wrote.

Nakajima National School was located about 1.1 kilometers from the hypocenter. After the atomic bombing, Mr. Kawaguchi went into the city of Hiroshima repeatedly over several days as a member of a rescue party established at his school. In his account he wrote, “I traveled around Hiroshima on bicycle for about a week, but I don’t have the words to describe the overwhelming devastation I found.”

The students who wrote the essays had already graduated from the school at the time of the bombing, with some advancing on to the girls school and experiencing the bombing when they were working as mobilized students. Based on this reporting by the Chugoku Shimbun, using as reference related documents and other information, it was learned that at least five of the 17 writers had been killed in the atomic bombing. In addition, the names of two other students matched two found in a list of mobilized students killed in the atomic bombing, making it likely that those two, based on their school year information indicated there, were also essay writers.

Takashi Kawaguchi, 80, Mr. Kawaguchi’s oldest son who lives in Kure City, said “I wonder what my father had in mind in holding on to the essays,” in an attempt to grasp the emotions of his father, who had lost students he taught to the atomic bombing. He added, “I truly hope the owners of the essays or their bereaved families are found.”