Striving to fill voids in Hiroshima—Record of A-bombing written by Dr. Matsubayashi of Senda-machi in letter to daughter 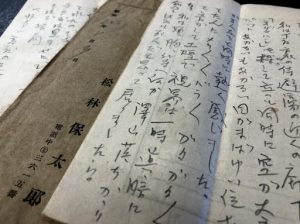 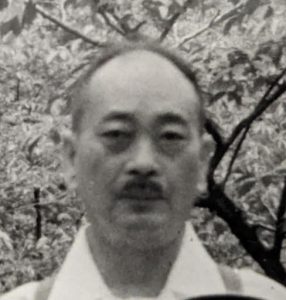 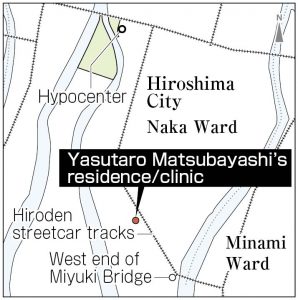 The physician Yasutaro Matsubayashi (1890–1961) had a private medical practice in the area of Senda-machi, located in what is now Hiroshima’s Naka Ward. A letter he wrote the day after the U.S. atomic bombing of August 6, 1945, exists to this day. He wrote about his own A-bombing experiences and observations in the letter he sent to his daughter in Fukuyama City. From the perspective of a physician, he was able to analyze the condition of victims while providing first aid and medical care immediately after the atomic bombing. Very early on, he referred to the possibility that the bomb used in the atomic bombing was a “new weapon.”

He used the back of voucher slips as paper for the letter, hastily writing eight pages with a pencil. He wrote the letter while at his friend’s house in the area of Tanna (now part of Minami Ward), where he had taken refuge. The letter was addressed to his second daughter, Teiko Monden (who died of illness in 1946), a physician that had moved to the city of Fukuyama after she married. Mr. Matsubayashi wrote six of the eight pages on August 7, and the other two on August 8. He asked someone to mail the letter, which is thought to have been sent from around Onomichi City on August 9.

In his writings of August 7, he described in detail his experiences in the atomic bombing at his combined residence/clinic, located about 1.7 kilometers from the hypocenter. “The sky was very bright, extremely bright. It became so bright as to be blinding, and at that instant, I felt heat.” Mr. Matsubayashi became trapped under his collapsed house, injuring his right arm. He managed to crawl out before the entire area became engulfed in flames. He provided first aid to victims at the west end of Miyuki Bridge (now in Naka Ward) in the immediate aftermath of the atomic bombing.

Mr. Matsubayashi wrote, “I feel that the bomb used in the attack was a new weapon.” As to the injuries of victims, in addition to the external injuries caused by the blast, which was “accompanied by a very intense flash,” he wrote that “people who were outside suffered burns for some reason” and that the burns ranged widely from “second-degree burns to severe burns over the entire body.” He paid particular attention to such wide-ranging burn injuries.

In the afternoon of August 7, Japan’s Imperial Headquarters announced that the bomb was indeed a “new-type bomb.” Mr. Matsubayashi likely had not already obtained this information before he wrote the letter. He appears to have come to the conclusion through his own observation of victims while providing treatment at the scene of the tragedy. In his letter, Mr. Matsubayashi wrote that the atomic bombing “occurred in silence after the air-raid alert had been lifted,” and advised his daughter to “stay inside” in the case a sudden attack were to happen.

Mr. Matsubayashi’s clinic in the area of Senda-machi was completely destroyed in the fires after the atomic bombing. According to what he wrote later, he treated survivors in the village of Okukaita (now part of the town of Kaita) starting on August 7 at the request of the prefectural government. For two years afterward, he treated survivors in the areas of Aosaki (now part of Minami Ward), Yaga (now part of Higashi Ward), and other places. His clinic was rebuilt in 1948 and is now run by Dr. Tokiko Matsubayashi, 89, the wife of his second son.

Ms. Matsubayashi discovered the letter among Ms. Monden’s belongings that had been returned to her parents’ house in Senda-machi. Ms. Matsubayashi said, “I know that my father-in-law began treating victims right after the atomic bombing, but I never had a chance to hear all the details. I’ll keep the letter as part of our family history.”